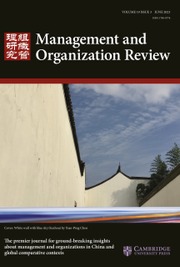 Research Potential on Innovation in India and China

Recently, we attended the Second MOR Research Frontiers Conference hosted by Indian Institute of Management Bangalore in India. The theme of the conference was ‘The SME Ecology of Transforming Economies: Knowledge Creation, Entrepreneurship, Innovation and Economic Growth’. As Professor Peter Murmann stressed, the purpose of this frontier conference was about collectively exploring and extending the frontier of research, and therefore, a number of emerging topics were discussed. The conference highlighted for us the great potential of research about India or comparative studies across transitional economies, especially between India and China. Below we highlight a few thoughts or reflections.

Recently, we attended the Second MOR Research Frontiers Conference hosted by Indian Institute of Management Bangalore in India. The theme of the conference was ‘The SME Ecology of Transforming Economies: Knowledge Creation, Entrepreneurship, Innovation and Economic Growth’. As Professor Peter Murmann stressed, the purpose of this frontier conference was about collectively exploring and extending the frontier of research, and therefore, a number of emerging topics were discussed. The conference highlighted for us the great potential of research about India or comparative studies across transitional economies, especially between India and China. Below we highlight a few thoughts or reflections.

First, it is very intriguing to explore the unique business contexts in transitional economies and the impact of institutional and business environment factors on the innovation process in countries like India and China. At the conference, Professor Niron Hashai drew implications from studying the influences of the Israeli institutional environment and cultural legacy on regional entrepreneurs’ activities and innovation. The Israeli government office of the Chief Scientist played an important role in advancing technological capabilities of Israel Defense forces. The spillover of technological capabilities from the national defense system, supportive government policies, and funding for commercial R&D were all instrumental in unleashing the potentials of developing business innovation in Israel.

Similarly, the institutional and national factors also played a critical role in developing innovation in India – in its ‘decade of innovation’ (2010–2020). For instance, factors such as IPR and incentives for innovation in India were discussed by Dr. Chirantan Chatterjee at the conference. It was pointed out that the institutional environment, specifically the process patent regime, had largely influenced the innovation preferences of Indian firms. Benefiting from this regime, India developed its own pharmaceutical industry best known for generic drugs (Chittoor & Aulakh, Reference Chittoor and Aulakh2015). Similar to India, Chirantan argued that the Chinese unique patent regime, for example, the existence of utility patent might also shape the regional innovation process in China. Both China and India, respectively, received support from their governments via various national funding schemes or councils such as National High-tech R&D Program in China, and the National Innovation Council in India. The results and findings from the Western economies may not generalize to transitional economies like India and China. We see a great potential to conduct future research on further exploring the relationship between utility patent and compositional innovation (Luo & Child, Reference Luo and Child2015). It is also interesting to explain and examine how the business and institutional environments shape the innovation process and progress in India and China.

Our second reflection is about the question of how culture and historical factors shape the perception, process, features, and outcomes of innovation. In contrast to the advanced economies, China and India are two countries with ordinary or poor resources for developing innovation. Similar to the prevalent phenomenon of compositional innovation that arises from the novel ways of combining ordinary resources in China, frugal innovation or ‘jugaad’ is a popular local approach to innovation in India. It is characterized by getting more from less through making ingenious use of existing resources and technologies in a flexible approach with the purpose of helping communities that have traditionally been underserved (Prabhu & Jain, Reference Prabhu and Sanjay2015). Similar to Jewish civilization, Indian and Chinese civilizations have also added radiance and beauty to each other and have their own unique cultures. At the conference, we observed Indian scholars also started the discussion about Indian culture, history, and the features of regional innovation, such as juggad. For instance, in the presentation about Indian cultures and innovation, Dr. Kunal Kamal Kumar argued that Indian culture was strongly embedded with characteristics such as Brahminical idealism, adherence to tradition, low tolerance of failure, and self-reliance and solitude. These cultural characteristics may have a significant impact on the process and progress of Indian innovation, but the relationship is underexplored. Moreover, we also found some similar constructs between China and India, which are different from the Western countries. For instance, in contrast to the concept of ‘mentor’ in the West, the concepts of ‘shifu’ in China and ‘guru’ in India would be closer with each other. In short, as Kumar argued, both India and China could advance our understanding by exploring an indigenous focus to understand indigenous challenges. In order to archive this goal, it might be necessary for us to revisit our own philosophies and theories at first. Western Lens are not always the most appropriate. We are very glad to have MOR publish and discuss these topics and we do hope to see the development of some solid meta-theories arising from these special contexts.

Research Potential on Innovation in India and China
×

Research Potential on Innovation in India and China
×

Research Potential on Innovation in India and China
×
×