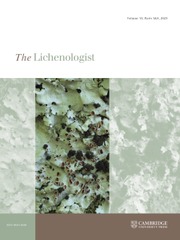 Two species of Catinaria with an unusual hepaticolous (i.e. growing on liverworts) lifestyle are described as new to science. Catinaria brodoana is described from species of Cheilolejeunea sect. Leucolejeunea (Lejeuneaceae) growing in south-eastern North America. Catinaria radulae is described from Radula flavifolia (Radulaceae) growing in the Cape Horn Archipelago of southernmost Chile, South America. The species are compared with the type of Catinaria (C. atropurpurea). In addition to occurring on hepatics, C. brodoana is characterized by its cellular exciple, warted ascospores and thallus composed of goniocysts, while C. radulae is characterized by its exciple of radiating hyphae, warted ascospores and absence of a lichenized thallus.