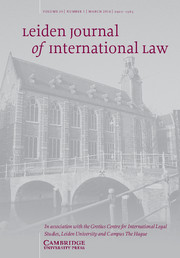 INTERNATIONAL LEGAL THEORY: The Future of Restrictivist Scholarship on the Use of Force