Observations at the Bogvatn Glaciers, Norway

A description of the two glaciers n. Bogbre and s. Bogbre is given. In summer 1965 snow pillars capped with avalanche material were seen. A blister-shaped swelling which appeared on the surface of s. Bogbre and which emitted water when punctured is discussed.

Two glaciers, n. Bogbre and s. Bogbre, descend towards the lake Bogvatn (lat. 66’ 40’ N., long. 14° 30’ E.) which lies at the north-eastern limit of Østisen, one of the two ice caps of Svartisen, Norway. No detailed account of them exists, though Reference RabotRabot (1898) noted that there were two very flat glaciers within a marked depression in the Skjelátind-Spisstind mountain chain in 1882, and photographed them from the south-east side of Bogvatn (Fig. 1). Reference MarstranderMarstrander (unpublished) visited the area in 1912, but merely noted that the two glaciers descended towards the lake. Studies made in 1965 were limited by the exceptionally widespread snow which remained from the previous winter. 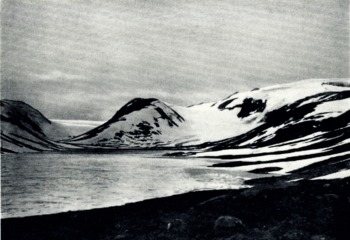 Fig. 1. The Bogvatn glaciers from the south-east, 8 August 1882. Roth s. Bogbre (left) and n. Bogbre (right) are largely covered by snow, but the ice on the lake is breaking up.

N. Bogbre flows within a corrie-like basin north-east of Bogvatn, but is supplied in part through an ice fall which descends from the snow fields above the back wall, and in part by avalanching from a hanging tributary at the northern side (Fig. 2). During the first weeks of the 1965 summer, the whole glacier was covered by old snow, but this melted slowly from the lower section of the tongue during August. By the middle of that month, snow, slush and ice zones could be identified easily, though an extensive snow-drift continued to blanket the end of the glacier. The ice surface generally was smooth and unbroken, with crevasses limited to a small area at the southern side, near the lower end. The main melt-water stream, which flowed from this part of the glacier, appeared to be undercutting the edge of the ice, for the glacier there ended in a steep cliff, 3–4 m. high, partly bordered by moraine. Elsewhere, the ice seemed to slope gently down to the valley floor beneath the cover of snow. Well-marked foliation, which was visible at the surface once the snow had melted away, consisted generally of blue bands 8–12 cm. wide, separated by bands of bubbly, white ice 25–35 cm. wide. Avalanches fell regularly from the northern tributary, and a fan of ice blocks, snow and boulders covered some 4,000 m.2 of n. Bogbre; the size of the largest blocks was of the order of 100 m.3. The remains of an older fan were visible as a large hummock at the surface of n. Bogbre, and it was clear that the snow fields and glaciers lying above the northern side of the glacier contributed in no small measure to its overall nourishment. 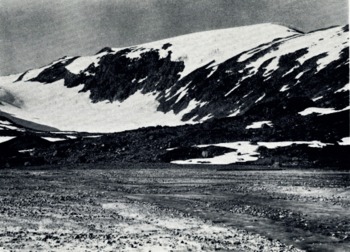 Fig. 2. N. Bogbre from the south-east, 29 August 1965. The tributary glacier which now hangs above the northern wall avalanches regularly. The outermost recent moraine (centre) partly covers a spur which juts from this northern wall. The outwash deposits (foreground) extend as a delta into Bogvatn

S. Bogbre is a minor outlet of Østisen. Its small accumulation area is bounded to the south and west by low cols above the zones which supply Fingerbreen and ø. Glomvassbre, both of which are much larger. The glacier is bordered by high rock walls, the one to the north being particularly steep. The lower end of the glacier was covered by snow throughout the summer of 1965, but bare ice became exposed further up-glacier during mid-August, and slush and refreezing zones developed below this. Several deep gullies in the steep rock wall at the northern side of the glacier formed avalanche tracks, and fans of both old and more recent avalanche material lay below them. Dirty, wet avalanches and snow-block falls were typical, and there was evidence that they occurred most commonly during the phase of snow melting in spring and early summer, as elsewhere in the Scandinavian mountains (Reference RappRapp, 1960).

Mushroom-shaped snow formations below the north wall were studied on 13 August. Pillars of soft, old snow were capped by “tables” of avalanche material. A large avalanche fan near the head of the glacier included “tables” of rock, as well as of old snow, resting on pedestals about 1 m. high (Fig. 3). Clearly, a combined rock fall and snow avalanche had descended the valley wall above this site. Further down-glacier, about too m. from the end, there was an isolated, asymmetrical snow pillar about 3 m. high (Fig. 4). A block of old avalanche snow, about 140 cm. thick and 150 cm. across, lay on a pedestal of old snow 180 cm. high. The contact between the block, which was tilted to the south, and the pedestal was marked by a dirt layer, though no layering was evident within either part of the formation. The pillar, which stood in a radiation hollow, was at the foot of the snow slope below the valley wall, where the gradient was gentle in both transverse and longitudinal directions; there were no similar forms in the vicinity. 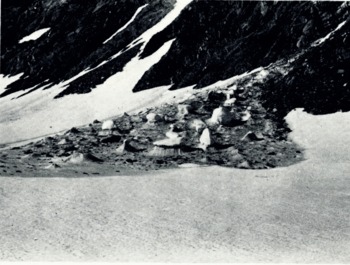 Fig. 3. Avalanche cone of old snow and rock debris at the foot of the northern valley side, s. Boghre, 13 August 1965. Blocks of old snow several metres wide stand on pedestals up to 1 m. high 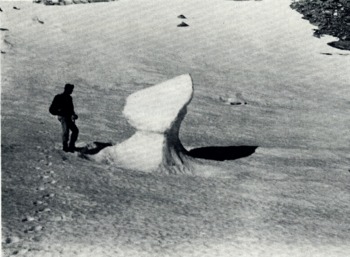 The snow which had avalanched from the valley side clearly was more resistant to melting than was the soft snow on to which it had fallen, presumably because of its greater water content. The effect of this may have been emphasized by the action of winds blowing over the glacier within a few feet of the surface, as suggested by Reference FryxellFryxell (1965) for similar features on Teton Glacier, Wyoming. However, although there was a marked under-cutting at some of the snow pillars, not all had been affected in this way. During the summer, the area within which the pillars were located was unshaded for long periods, and the effect on ablation of both direct and indirect radiation must have been considerable.

There seemed no doubt that the avalanches responsible for the formation of the snow pillars on s. Bogbre had descended the valley side during the later part of the 1964–65 accumulation season, or during the early stages of the 1965 ablation season. One large snow-block fall occurred from the southern side of the valley, a few hundred metres below the glacier, within the period 21–28 August 1965.

On 13 August, an unusual, blister-shaped swelling was noticed on s. Bogbre, approximately half-way across the glacier and 200 m. above its lower end. Some 3 m. in diameter, it rose to about 30 cm. above the surrounding snow surface. When the “blister” was pierced with a ski-stick, water gushed out. This continued to flow for several minutes, and ran as a small stream over the surface towards the end of the glacier. It was not possible to determine with certainty the manner in which this feature had formed. However, an explanation might be offered by the abnormal weather conditions of the early summer. After two hot, sunny weeks, an abrupt change on 13 July led to a period of stormy and very cold conditions, with heavy falls of snow. It is possible that a pool of water formed on the very flat surface of s. Bogbre as the upper part of the snow cover melted in early July, and that subsequently this froze and became covered by snow. The “blister” may have resulting from the freezing of the pool and the drifting of snow on and against it. In the warm weather which followed, the ice would tend to melt as the overlying snow depth decreased, and a reservoir of water would form just below the surface.

The observations recorded here were made during the 1965 British Schools Exploring Society Expedition to the Svartisen area. The author was assisted by a grant from the University of Manchester. Norges Geologiske Undersokelse kindly lent copies of the diaries and field notes of R. Marstrander. Figure 1 is reproduced by permission of Professor F. Isachsen, Geografisk Institutt, Universitetet i Oslo.

Observations at the Bogvatn Glaciers, Norway
×

Observations at the Bogvatn Glaciers, Norway
×

Observations at the Bogvatn Glaciers, Norway
×
×