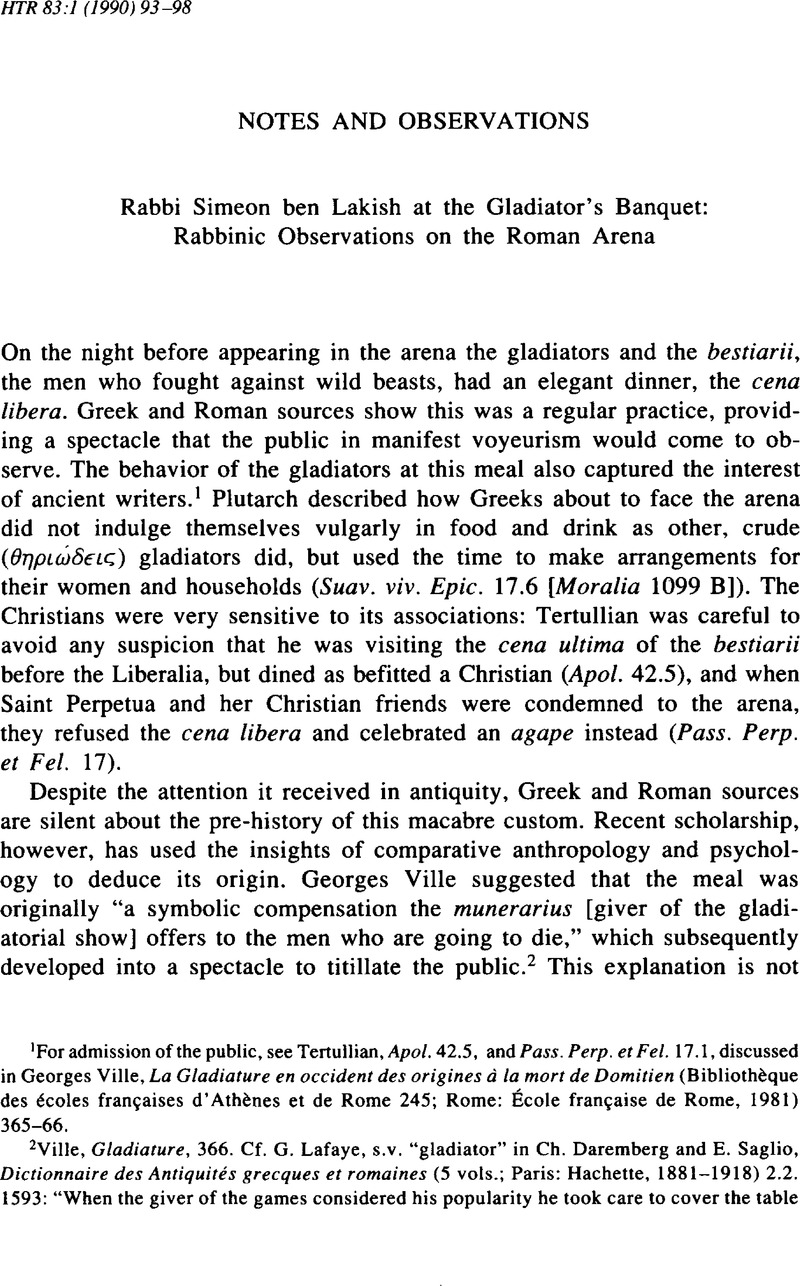 2 , Ville, Gladiature, 366. Cf. G. Lafaye, s.v. “gladiator” in Daremberg, Ch. and Saglio, E., Dictionnaire des Antiquites grecques et romaines (5 vols.; Paris: Hachette, 1881–1918) 2.2. 1593: “When the giver of the games considered his popularity he took care to cover the table with very delicate dishes. It was to force him to provide these bountifully that the meal was served in public [our translation].”

3 Meuli, Karl, Der griechische Agon: Kampf und Kampfspiele im Totenbrauch, Tolentanz, Totenklage, und Totenlob (Cologne: Historisches Seminar der deutschen Sporthochschule, 1968) 49. In support of Meuli's hypothesis, one might consider, for example, the examples cited by Frazer of surrogates treated as kings and subsequently sacrificed (The Golden Bough pt. 3, “The Dying God” [New York: Macmillan, 1935] 52–58, 113–19). Most notable is the Babylonian custom recorded in Athenaeus 14.44, citing the priest Berosus: a condemned prisoner receives a five-day investiture as king with privileges including access to the royal harem. At the end of the period the prisoner is hung or impaled as a sacrifice, to ensure the perpetual renewal of the monarch. This custom is attested in Mesopotamian sources; see Frankfort, Henri, Kingship and the Gods (Chicago: University of Chicago Press, 1948) 262–65. In several scapegoat rituals in Greece, the indigent victim is first richly feasted, then cast out (see esp. Callimachus fr. 90. Cf. with the Diegesis and Bremmer, Jan, “Scapegoat Rituals in Ancient Greece,” HSCP 87 [1983] 301–5 for further reference and discussion). , Bremmer (“Scapegoat Rituals,” 305) concludes, “The people realized that they could not save their own skin by sacrificing the scum of the polis. For that reason the scapegoat was always treated as a very important person.” On the elements of human sacrifice in gladiatorial combat, see Malten, L., “Leichenspiel und Totenkult,” Mitteilungen des deutschen Archdologischen Instituts, Romische Abteilung 38/39 (1923-1924) 300–40.

4 The translation of this passage in The Soncino Talmud is unreliable and depends on the printed edition of the Talmud text; the translation given here follows the Munich manuscript as given in the notes of Feldblum, Meyer, Dikduke Sopherim: Tractate Gittin (New York: Yeshivah University Press, 1966).

7 This expression is found in the Babylonian Talmud only in this story. The medieval commentator Rashi (1040-1105) glosses, “a tied up sack with a strap and a round stone or lead in it.” This would be similar in effect to a mace.

8 This is the only likely translation of the Aramaic dnyhwl dmy (Munich MS). This understanding is already evident in the medieval lexicon Ha-Arukh of Nathan the son of Yehiel of Rome, who cites our passage in his lexicon (s.v. hi) and glosses, “because they fulfil his command his blood becomes sweet and they have an interest in him.” The textual and exegetical traditions preserved in Ha-Arukh are often of superior value (, Krauss, Lehnworter, xxxiv–xxxv). Most modern lexicographers accept this interpretation, assuming that the root hwl should be understood like hly “to be sweet” (so , Levy, Worterbuch 2. 23; , Kohut, Aruch 3. 387; Dalmann, Gustaf, Aramdisch-neuhebrdisches Handworterbuch zu Targum, Talmud und Midrash [Gottingen: Pfeiffer, 1938] 139; Chaim and Kosowski, Biniamin, Thesaurus Talmudis [Jerusalem: The Ministry of Education and Culture, Government of Israel & The Jewish Theological Seminary of America, 1965] 14. 438). There are no other attestations of the phrase dnyhwl dmy “sweet blood,” but in several Aramaic dialects hly has the meaning of “desirable” or “valuable.” The alternate translation found in Rashi (“so that he will atone for his blood”) is based on a misunderstanding of an inferior text.

9 Some have understood this to mean “bind” (, Kohut, Aruch 7. 120; , Levy, Worterbuch 4. 325), but the root qmf does not have this meaning. Indeed, in b. Sanh. 95a the root kpt, “to tie,” is used with the roots qmf and ytb to indicate binding someone tightly and seating him down, but the root kpt is lacking in our text. The context, which suggests throwing someone down onto a seat, favors “take hold.”

10 Literally, “a rock and a half; this phrase is unattested elsewhere in the Babylonian Talmud and might be a colloquialism.

11 Rabbinic attitudes toward Greek and Roman civilization are complex and varied, and rabbinic literature incorporates both direct and oblique polemics against various practices of these cultures. See, for example, Wallach, L., “A Rabbinic Polemic Against Idolatry,” HUCA 19 (1946) 389–404(reprinted in Fischel, H. A., ed., Essays in Greco-Roman and Related Talmudic Literature [New York: Ktav, 1977] 111–26); b. Sabbat 33b.

12 The ritual transformation continues the next day. Pliny Nat. hist. 35.49 observes that luxurious carts brought the gladiators to the arena, an indulgence that seems similar in intent to the cena. Cf. , Lafaye (“gladiator,” 1593), who suggests that Pliny may be referring to the splendid clothes the gladiators wore during their procession into the arena. Such clothing, of course, would also ennoble the gladiator.

17 Not all manuscripts read the crucial word Iwdywt, but this reading is supported by the superior manuscript and adopted in Lieberman, Saul, The Tosefta Moc ed (New York: Jewish Theological Seminary, 1962) 285, line 84.