American family and demographic patterns and the northwest European model 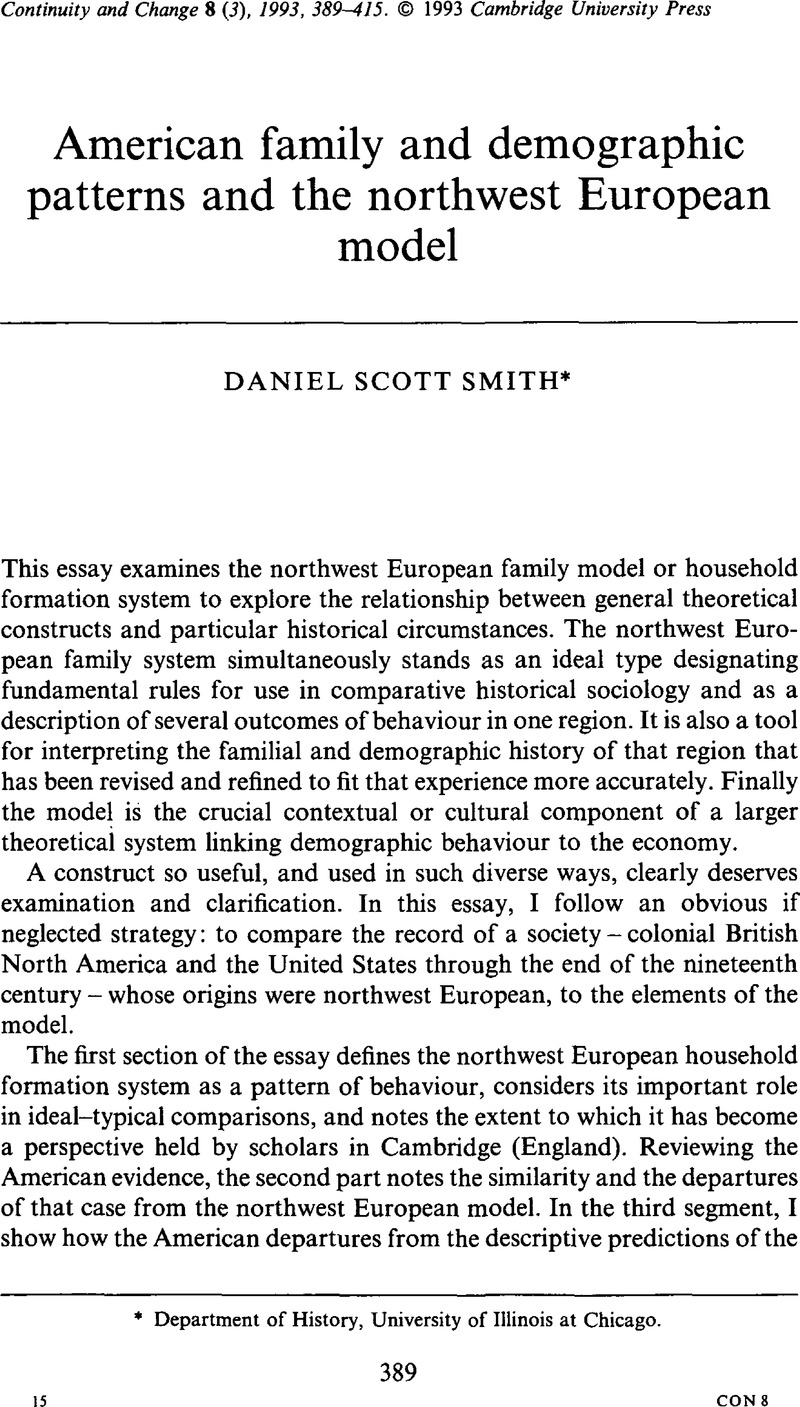 2 Hajnal, , ‘Two kinds of pre-industrial household formation system’, in Richard, Wall et al. eds., Family forms in historic Europe (Cambridge, 1983), 65, 69. The formation rules of the contrasting joint household systems are: (a) earlier marriage for men and rather early marriage for women (mean ages at first marriage are under 26 for men and under 21 for women); (b) a young married couple often start life together in a household of which an older couple are in charge; and (c) households with several married couples may split to form two or more households, each containing one or more couples.

6 A historian from Canada, David Levine, has developed a Marxisant version of the model in a number of studies; see Reproducing families: the political economy of English population history (Cambridge, 1987). Emmanuel Todd, a French sociologist, is responsible for the most sweeping elaboration: The explanation of ideology: family structure and social systems, trans. David, Garrioch (Oxford, 1985).

7 In The Protestant ethic and the spirit of capitalism, trans Talcott, Parsons (New York, 1958; orig. pub. 1904–1905), Weber, of course, used the aphorisms of Benjamin Franklin to exemplify post-Calvinist capitalist ethics.

8 Warren, Sanderson, ‘Quantitative aspects of marriage, fertility and family limitation in nineteenth-century America: another application of the Coale specifications’, Demography 16 (1979), 339–58.

11 If the birth record begins in 1700, and the first tabulated marriage cohort begins in 1720, it is obvious that no one who married over age 30 in the 1720–1729 period can enter the calculation. The way around this bias is to organize the early data by birth cohorts. There is, as Steven Ruggles has shown, an opposite bias in studies of marriage age based on the linkage of birth to marriage records; the calculation is biased downward because those who migrate before marriage are typically lost to observation; see his ‘Migration, marriage and mortality: correcting sources of bias in English family reconstitutions’, Population Studies 46 (1992), 507–22.

12 Nor is this difficulty novel. The English radical William Godwin correctly observed that the Hingham, Massachusetts, ratio of marriages to births, which Malthus had cited in favour of his argument for early marriage in America, was well within the values reported for western European populations. However, the child-woman ratio for the town was not attained nationally by the white population until 1870, after more than a half-century of declining child-woman ratios. Godwin was right about the numbers, but quite wrong about the larger picture. Malthus made an empirical mistake, but had the explanation more correctly: an object lesson, if a bit dangerous, for historical demographers today. See Smith, Daniel Scott, ‘Underregistration and bias in probate records: an analysis of data from eighteenth-century Hingham, Massachusetts’, William and Mary Quarterly 3rd ser. 32 (1975), 102–3.

13 As Hajnal notes, a high householder rate for young married men is compatible with a stem-household formation system in which the older couple retires at the time of marriage of the heir.

15 Seward, Rudy Ray, The American family: a demographic history (Beverly Hills, 1978), Table 3.6 (p. 86). For the censuses between 1850 and 1870, Seward had to infer generational depth from a combination of surnames and age differences among household members. It seems likely that the 1880 figure is closer to the mark than the inferred percentages for the 1850 to 1870 censuses.

16 See my ‘Historical change in the household structure of the elderly in economically developed societies’, in Fogel, Robert W. et al. eds., Aging: stability and change in the family (New York, 1981), 107.

27 Counting slaves as members of their owners' households leads to very high figures for mean household size, as for example that of 43.6 on the island of Tobago in 1770 or 9.5 in South Carolina in 1790. However, mean household size for whites in the latter case was only 5.5; see Rossiter, W. S., A century of population growth (Washington, 1909). See also Wells, Robert V., The population of the British colonies in America before 1776 (Princeton, 1975), 300.

29 See, most notably, Yasukichi, Yasuba, Birth rates, and Richard, Easterlin, ‘Population change and farm settlement in the northern United States’, Journal of Economic History 36 (1976), 45–75. Variations in the availability of land are not the entire story of American fertility differentials and decline. For a review of the issues, see my ‘“Early” fertility decline in America: a problem in family history’, Journal of Family History 12 (1987), 73–84.

31 For the argument and a discussion of the migration mechanism, see my ‘A Malthusian-frontier interpretation of United States demographic history before c. 1815’, in Woodrow, Borah, Jorge, Hardoy, and Stelter, Gilbert A. eds., Urbanization in the Americas: the background in comparative perspective (Ottawa, 1980), 15–24.

32 Smith, D. S., ‘“All in some degree related to each other”: a demographic and comparative resolution of the anomaly of New England kinship’, American Historical Review 94 (1989), 44–80.

35 Ester, Boserup, The conditions of agricultural growth: the economics of agrarian change under population pressure (Chicago, 1965).

38 See Gutmann, Myron P., Toward the modern economy: early industry in Europe, 1500–1800 (New York, 1988), 115–93; Spagnoli, Paul G., ‘Industrialization, proletarianization, and marriage: a reconsideration’, Journal of Family History 8 (1983), 230–47; Lehning, James R., ‘Nuptiality and rural industry: families and labour in the French countryside’, Journal of Family History 8 (1983), 333–45; Gullickson, Gay L., Spinners and weavers of Auffay: rural industry and the sexual division of labour in a French village, 1750–1850 (Cambridge, 1986), 129–44; and Ulrich, Pfister, ‘Proto-industrialization and demographic change: the canton of Zurich revisited’, Journal of European Economic History 18 (1989), 629–62. More studies have shown that protoindustrialization was associated with population growth than with earlier and more universal marriage. Migration is the obvious source of population increase for small localities. While variation in the number of marriages correlates with price changes indicating protoindustrial activity, these relationships could be driven by migration into and out of the localities so affected rather than by the incidence of marriages in the currently unmarried population. See also Continuity and Change 8 (2), the special issue on protoindustrialization.

41 Elliott, Vivien Brodsky, ‘Single women in the London marriage market: age, status, and mobility’, in Outhwaite, R. B. ed., Marriage and society: studies in the social history of marriage (New York, 1982), 81–100. Even more suggestive in the doubts it raises about the familial mechanisms behind a Malthusian homeostatic regime is Elliott's finding that paternal death forced young women to migrate to London as servants and thereby delayed their entry into marriage. Some 64 per cent of migrant women had lost their fathers by the time of marriage compared to 47 per cent of women native to the high-mortality environment of the city. This micro-level result conflicts, of course, with the Malthusian homeostatic logic that connects higher mortality to the opening of economic niches and thus to earlier marriage of men and, implicitly, consequently of women, and thereupon to a subsequent increase in fertility and population growth. It should be noted that most of the empirical studies of both the Malthusian and the protoindustrial models have dealt with short-term fluctuations and long-term trends rather than individual-level behaviour.

43 Daniel Little has noted the thinness of evidence available to test the validity of the Malthusian model as applied to the historic Chinese case; see his Understanding peasant China: case studies in the philosophy of social science (New Haven, Conn., 1986), 108–18, 130–6, 143–4. Nuptiality has shown flexibility in Asian societies in recent decades, decreasing substantially in both south and southeast Asia. In India during this century (1901–81), female mean age at first marriage rose from 13.0 to 18.4, and male from 20.4 to 23.4; see Agarwala, S. N., India's population problems (Bombay, 3rd ed., 1985) 99–113. Also see Richard, Leete, ‘The post-demographic transition in east and south-east Asia: similarities and contrasts with Europe’, Population Studies 41 (1987), 187–206.

44 Klein, Herbert S. and Stanley, Engerman, ‘Fertility differentials between slaves in the United States and the British West Indies: a note on lactation practices and their possible implication’, William and Mary Quarterly, 4rd ser. 35 (1978), 357–74.

46 Of course, here is another of the unstated assumptions behind the Malthusian model: marriage was preferable to remaining single and earlier marriage better than later. No doubt this assumption has some validity, since the options open to the unmarried, particularly spinsters, were quite bleak.

47 A valuable comparative study of slavery and serfdom is provided by Peter, Kolchin, Unfree labor: American slavery and Russian serfdom (Cambridge, Mass., 1987). Also see Peter, Laslett, ‘Household and family on the slave plantations of the U.S.A.’, in his Family life and illicit love in earlier generations: essays in historical sociology (Cambridge, 1977), 233–60.

49 Cody, Cheryll A., For everything there is a season: the family and demographic lives of enslaved people on the Ball plantations, 1720–1865 (book in manuscript, 1992), Chapter 5.

54 Steven, Ruggles, ‘Living arrangements of the elderly in America, 1880–1980’, and Richard, Wall, ‘Elderly persons and the members of their households in England and Wales from pre-industrial times to the present day’ (papers presented at the New Orleans meetings of the Social Science History Association, 1991).

57 For an emphasis on the long-run development of such values, see North, Douglass C., Institutions, institutional change and economic performance (Cambridge, 1990).

* Department of History, University of Illinois at Chicago.

Continuity and Change
×
Powered by UNSILO

American family and demographic patterns and the northwest European model