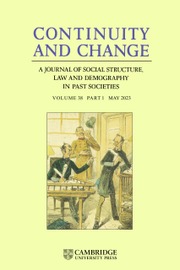 Population turnover and the family cycle: the migration flows in a Catalan town during the nineteenth century 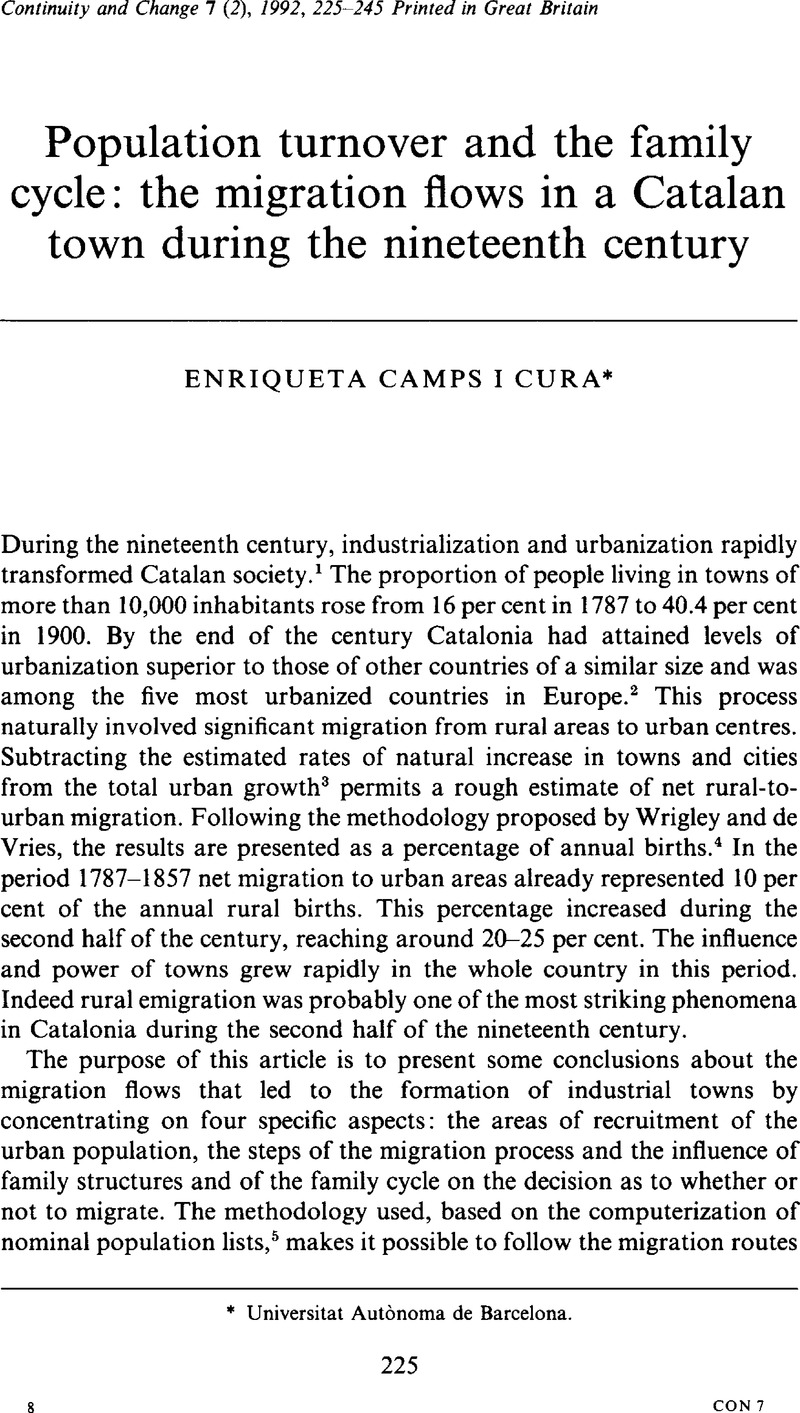 1 A version of this paper was presented in the Colloquium ‘Work and Family in Pre-industrial Europe’ of the European University Institute in December 1987.1 would like to thank the participants in the Colloquium for their comments. Professors Stuart J. Woolf, Richard Wall and David S. Reher also read the first draft of this article and offered some valuable suggestions.

3 A more detailed presentation of the methodology and the results here can be found in Camps i Cura, ‘Urbanizacion y migraciones’. The urban natural growth calculation differs from the procedure followed by J. de Vries, who assumed that all towns of 10,000 inhabitants or more had a negative natural growth in the nineteenth century. In the Catalan context, the evidence shows that towns with fewer than 20,000 inhabitants had a positive natural increase while Barcelona had a negative one. The use of de Vries's hypothesis would have resulted in a higher net rural-to-urban annual migration rate. Specifically, I have estimated that Barcelona had an annual natural increase between −0.3 per cent and −0.4 per cent during the nineteenth century, while the natural growth of the other towns was between 0.5 per cent and 0.7 per cent in the period 1787–1857, 0.4 per cent in the period 1857–1877 and 0.2 per cent in 1877–1900. These estimations are derived from a variety of case-studies of Catalonian populations.

6 The information on occupation given in this article is based on the employment at the moment of arrival to the town. Apprentices were very mobile, but the influence of seniority implied by the variation of wage rates over the life-cycle did not, for most individuals, involve movement between occupational sectors. Even if there were changes of occupation inside the factory, the employment histories obtained through the linkage of population censuses suggest that access to the factory apprenticeship system in a particular period of the life course - between the ages of 14 and 20 - defined future prospects of occupation for the rest of that individual's life. Normally, shifts in occupation implied the next generation. See Cura, E. Camps i, ‘La teoria del capital humane: una contrastacion empirica. La España industrial en el siglo XIX’, Revista de Historia Econdmica 8, 2 (1990).Google Scholar

7 The origins of migrants are documented for four other middle-sized industrial towns and for the largest textile factory of the Iberian Peninsula, which was situated in Barcelona. The proportion and origins of migrants in the total population are quite similar in all cases. See Cura, E. Camps i, ‘Migraciones interims y formacion del mercado de trabajo en la Cataluna industrial en el siglo XIX’ (unpublished doctoral thesis, European University Institute, 1990).Google Scholar

13 The more significant crises arose first in the early 1860s from the scarcity of raw cotton, and occurred again in 1866 following the financial crisis of that year, and then in the 1880s as a consequence of a slump in demand.

14 The patterns of migration in this period have been detailed in Cura, Camps i, ‘Industrializati´n y crecimiento urbano’.Google Scholar

17 In 1850, males employed in agriculture constituted 20 per cent of all employed males in the town. By contrast, in Catalonia as a whole, males with agricultural employments constituted 58.4 per cent of the total male work force in 1797, and 62.5 per cent in 1860. The first of these percentages is taken from Cura, E. Camps i, ‘La formacio òuna ciutat catalana sola ľimpuls de la industrialització’ (unpublished MA thesis, Universitat Autonoma de Barcelona, 1985)Google Scholar. The overall percentage has been derived from the population censuses and I would like to thank Roser Nicolau, who presented the figures in an Economic History seminar at the Universitat Autònoma de Barcelona in 1989.

25 Anna Cabré made the initial suggestion and consultation with my empirical data makes it plausible. For this topic see Medick, H., Interest and emotion: essays on the study of family kinship (Cambridge, 1986).Google Scholar

29 See Anderson, M., ‘Sources and techniques for the study of family structure in XIXth-century Britain’, in Wrigley, E. A., The study of XIXth century society (London, 1970).Google Scholar

30 The variation in employment rates according to age and gender have been set out in Cura, Camps i, ‘La formacio’.Google Scholar

35 Women's labour-force participation rates decreased sharply after the age of 30. Normally, from the age of 30 women concentrated on domestic work. In fact, this domestic work may have been the cornerstone of the urban waged family economy, since, if measured at current price levels, the value of women's domestic work exceeded the income of the husband. See Fuentes, P. Perez, ‘Relaciones de género y estrategias familiares en la primera industrializacidn vasca: San Salvador del Valle, 1877–1913’ (unpublished doctoral dissertation, Universidad del Pais Vasco, 1990)Google Scholar. Only in cases of great need would women aged 30 or over continue to work outside the household. The general pattern of married women's work in nineteenth-century Catalonia is similar to that found in urban areas in the Third World today. See Rodgers, G. ed., Urban poverty and labor market. Access to jobs and incomes in Asian and Latin American cities (Geneva, 1989)Google Scholar. For such areas, it has been noted that a wife's participation in the waged labour force is negatively correlated with the husband's income. Given the rules of determination of wages, the additional income from a child, in the medium term, should have brought the family a higher income. This fact and the accumulation of domestic tasks normally resulted in the segmentation of the labour market on the basis of gender. See Cura, Camps i, ‘Migraciones internas’.Google Scholar Other observations on the patterns of women's work can be found in Cura, Camps i, ‘La formacióGoogle Scholar’ and Reher, and Cura, Camps i, ‘Considerations’.Google Scholar

38 The term ‘contract’ is used in its most pure sense, that of mutual agreement.

42 This is in line with the results of other researchers. For the attitudes of artisans to the organisation/labour in nineteenth-century factories, forms which were inimical to decision-making, see Cura, Camps i, ‘La teoria del capital humano’Google Scholar. For a comparison of family economies in the pre-capitalist and capitalist context, see Reher, and Cura, Camps i, ‘Considerations’.Google Scholar

Population turnover and the family cycle: the migration flows in a Catalan town during the nineteenth century
×

Population turnover and the family cycle: the migration flows in a Catalan town during the nineteenth century
×

Population turnover and the family cycle: the migration flows in a Catalan town during the nineteenth century
×
×