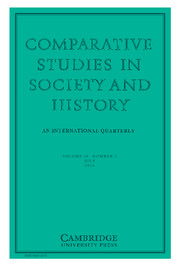 This article was made possible by a Fulbright Grant received during the 2010–2011 academic year, and by Princeton University's Democracy and Development Fellowship. I presented an earlier version at the Law and Society Association Annual Meeting in Honolulu in 2012. I am grateful to those whose advice helped me improve the paper: Atul Kohli, Lynn White, Hiromichi Furuido, Andrew Cock, and two CSSH reviewers. I thank Chihiro Sudō and Minami Enoki for research assistance.