Latest issue of Comparative Studies in Society and History 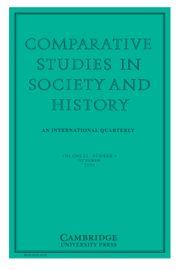