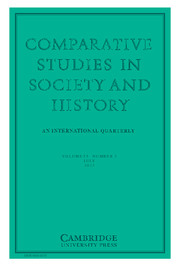 I am grateful to Hourig Attarian, Melissa Bilal, Leslie Peirce, Elizabeth Frierson, Molly Nolan, Fatma Müge Göçek, Ronald G. Suny, Gerard Libaridian, Laura Levine, Shane Minkin, Nora Nercessian, Vartan Matiossian, Marc Mamigonian, and my colleagues at MIT for reading or listening to parts of this work at different stages. I thank Vahé Tachjian for sharing primary sources, CSSH Managing Editor David Akin for his meticulous work and patience, and the anonymous CSSH reviewers for their valuable feedback. All translations from Turkish and Armenian are my own.