A Preliminary Study of Certain Mss. of Aristotle's Meteorology 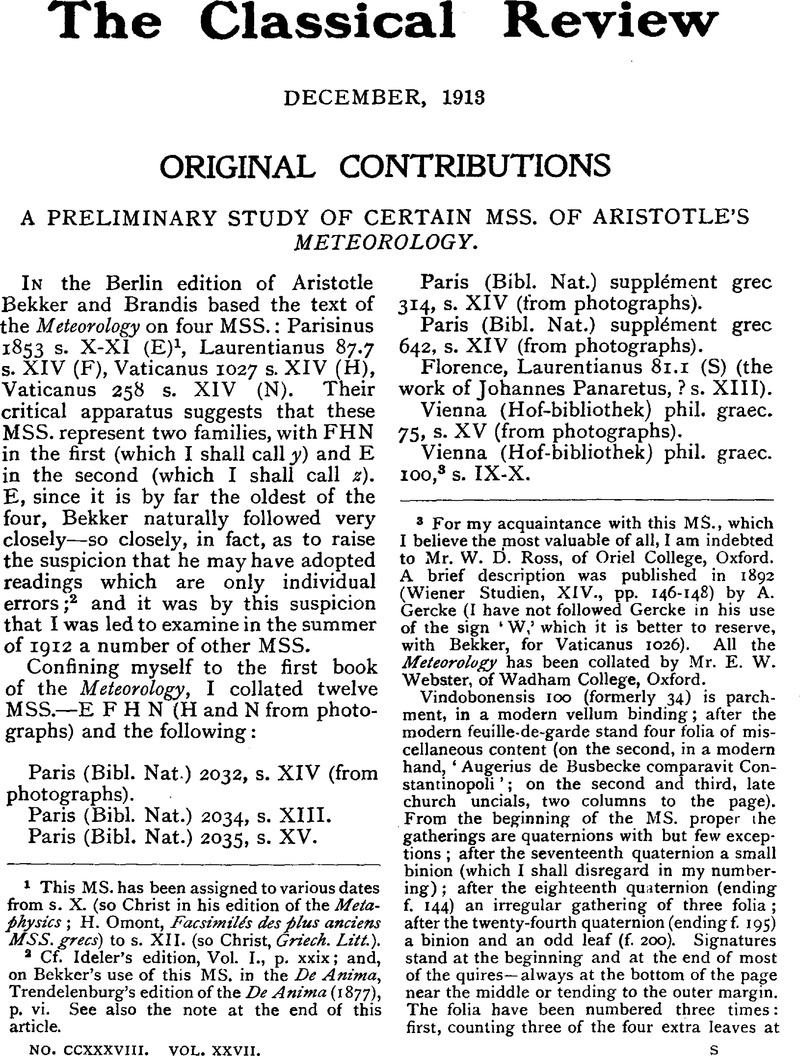 page 249 note 1 This MS. has been assigned to various dates from s. X. (so Christ in his edition of the Metaphysics; H. Omont, Facsimilés des plus andens MSS.grecs) to s. XII. (so Christ, Griech. Litt).

page 249 note 3 For my acquaintance with this MS., which I believe the most valuable of all, I am indebted to Mr. W. D. Ross, of Oriel College, Oxford. A brief description was published in 1892 (Wiener Studien, XIV., pp. 146–148) by A. Gercke (I have not followed Gercke in his use of the sign ‘ W,’ which it is better to reserve, with Bekker, for Vaticanus 1026). All the Meteorology has been collated by Mr. E. W. Webster, of Wadham College, Oxford.

Vindobonensis 100 (formerly 34) is parchment, in a modern vellum binding; after the modern feuille-de-garde stand four folia of miscellaneous content (on the second, in a modern hand, ‘Augerius de Busbecke comparavit Constantinopoli’; on the second and third, late church uncials, two columns to the page). From the beginning of the MS. proper the gatherings are quaternions with but few exceptions; after the seventeenth quaternion a small binion (which I shall disregard in my numbering); after the eighteenth quaternion (ending f. 144) an irregular gathering of three folia; after the twenty-fourth quaternion (ending f. 195) a binion and an odd leaf (f. 200). Signatures stand at the beginning and at the end of most of the quires—always at the bottom of the page near the middle or tending to the outer margin. The folia have been numbered three times: first, counting three of the four extra leaves at the beginning and the small binion after f. 136; second, omitting the four leaves at the beginning and the small binion; third, omitting the four leaves at the beginning, but counting the small binion. The quaternions are made up in two different ways: sometimes hair side to hair side and flesh side to flesh side in such a way as to leave flesh side on the outside of the quaternion; sometimes with the outermost leaf reversed, so as to make the first, second, and fourth rectos hair side, and the third recto flesh side. The pages are 28 cm. high, 19.2 cm. wide; on each page one column (20.5–21 cm. high, 11.8–12.5 cm. wide) of 41 lines. The ruling was done very accurately with a sharp point; the letters stand on the line, about 60–65 letters per line.

The script is early minuscule, of that fine and wonderfully uniform kind called by Gardthausen ‘Diamantschrift.’ I have found no instance of uncial βγδεζηκ–ξπς, all of which occur in E (uncial ν at end of line only). Other forms which occur in E and which I have not found in 100 are: λ with the long stroke beginning at the upper left, ρ open at the left (in E at end of line only), τ rising above the line, ψ with the curve, ω open, ligatures for ου, λο. Both 100 and E have occasionally uncial alphas at the end of lines; 100 has not, whereas E has, traces of cursive α begun below the line. In 100 ι is dotted only when it begins a word (so also in the Mt. Athos MS. of 861–2; ν. BEHΣ, Revue des Études Grecques, xxvi. (1913), pp. 53 sqq.), whereas in E it is sometimes dotted in the middle of a word. In general I can see nothing which makes it necessary to date 100 later than the D'Orville Euclid (a. 889, Pal. Soc. I. 65). All of the text is by one hand, in light brown ink. From f. 133ν to the end of the Meteorology a later hand, using greenish-black ink, has introduced numerous corrections, chiefly in the way of supplying accents. In the margins some of the paragraph marks and all the subject headings are in a brown ink slightly darker than that of the text, and are probably by a second hand.

to the first verso of the small binion;

from the second recto of the binion to 199ν.

The blank remainder of 199ν and the greater part of 200 were used by a fifteenth-century Greek for family records.

page 252 note 1 This is suggested by six cases of agreement of S with E against 100 FHN, in passages where either of the two readings makes satisfactory sense; if there were not so many of these cases, it would be easy to believe that the reading of S was due to individual error:

Such contamination from z as there may be does not, of course, impair the value of S where the latter differs from E and 314. Perhaps also late hand corrected S on E:

page 252 note 3 Bekker occasionally goes wrong because of the lack of such a check:

A Preliminary Study of Certain Mss. of Aristotle's Meteorology