The Perfect Subjunctive, Optative, and Imperative in Greek1 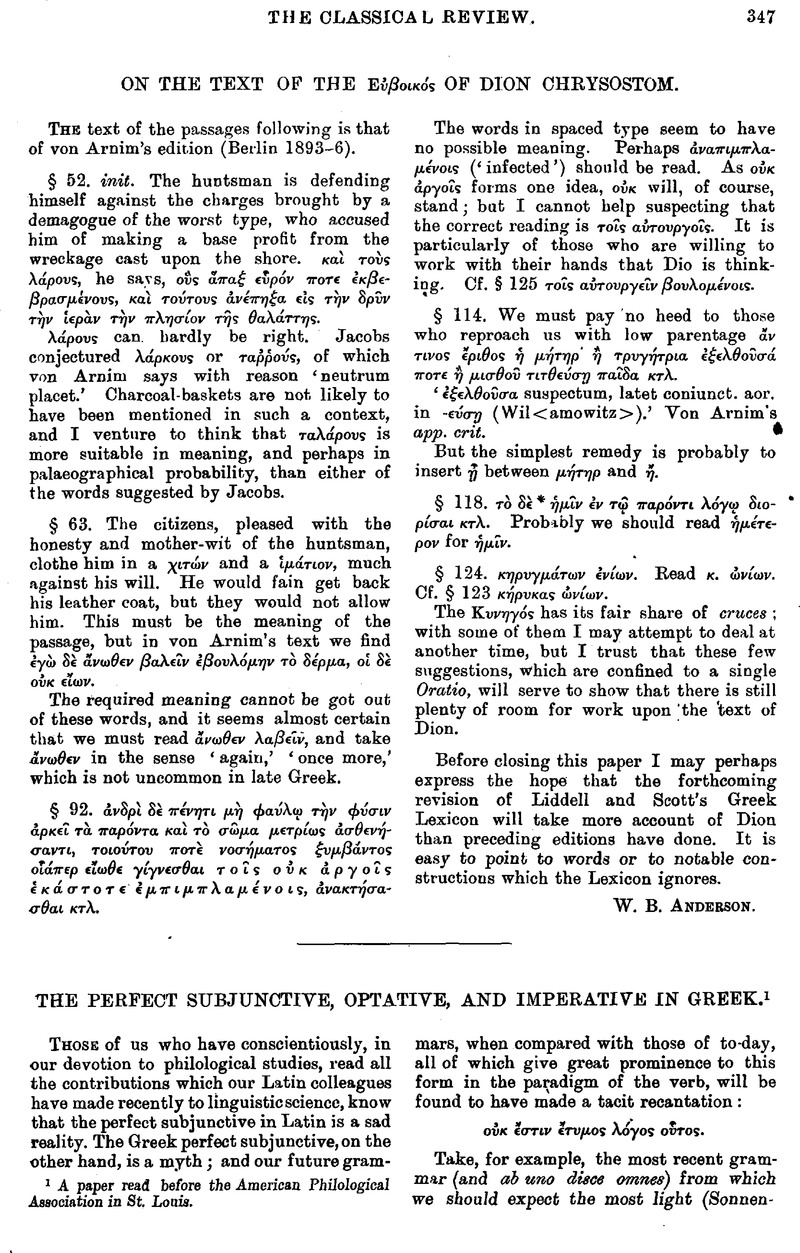 page 348 note 1 And these are days of peril. Does not John Brisben Walker, in a recent number of the Cosmopolitan, declare that one of the great facts with which he was impressed by his visit to the Universal Exposition at St. Louis, one of the great lessons he learned was: ‘That the so-called classical education, where persisted in, as in Great Britain and Spain, tends to place in the background even the most powerful nations’?

page 348 note 3 Indeed Sonnenschein in his preface claims that he has done this very thing. He has taken ‘great pains to secure brevity and accuracy in the rules. Matter which is of secondary importance is exscinded.’ His ‘scheme dispenses with a large number of unnecessary paradigms’ (!). In the advertisement of the authorized English translation of Kaegi's grammar there is an extract from the Dublin Review (1904), one sentence of which is worth quoting in this connexion: ‘Father Kleist…claims as his justification that Kaegi's work is the successful result of a very close and accurate study of the Greek authors generally read in a school course, conducted with this special purpose of either omitting entirely or of relegating to an unimportant place in his grammar all peculiarities or irregularities rarely met with in these authors.’

and translates ich habe gelöst, and

. Be it added, however, that

is a very common form in prose. When it is employed by other writers in the other moods it is regularly periphrastic: Xen. Hell. 4.8. 16

page 349 note 4 See the dialogues of Plato, particularly the Hippias Minor and Ion.

page 351 note 2 Periphrases in any mood with the aorist participle are rare; with the perfect frequent.

where the aorist optative of

shows clearly that the participle is not felt altogether as a part of a compound tense; Isoc. 12. 149

once (Xen. Hell. 3. 2. 8) in oratio oblique. So nearly all the other perfect optatives active that appear in the extant literature are found in this construction; but the usual change is to the periphrastic form. Considering the vast number of perfect indicatives (and infinitives), the absence of the perfect optative active appears all the more remarkable, since it had the same opportunity to develop, when once started, as the future optative, which, though a mere mechanical addition to fill out the scheme (like Sonnenschein's

), grew apace (after Pindar) until it flourished in Plato, in the orators, and particularly in Xenophon. Perhaps the perfect optative was felt to be too cumbrous.

but all the manuscripts have

1 A paper read before the American Philological Association in St. Louis.

The Perfect Subjunctive, Optative, and Imperative in Greek1