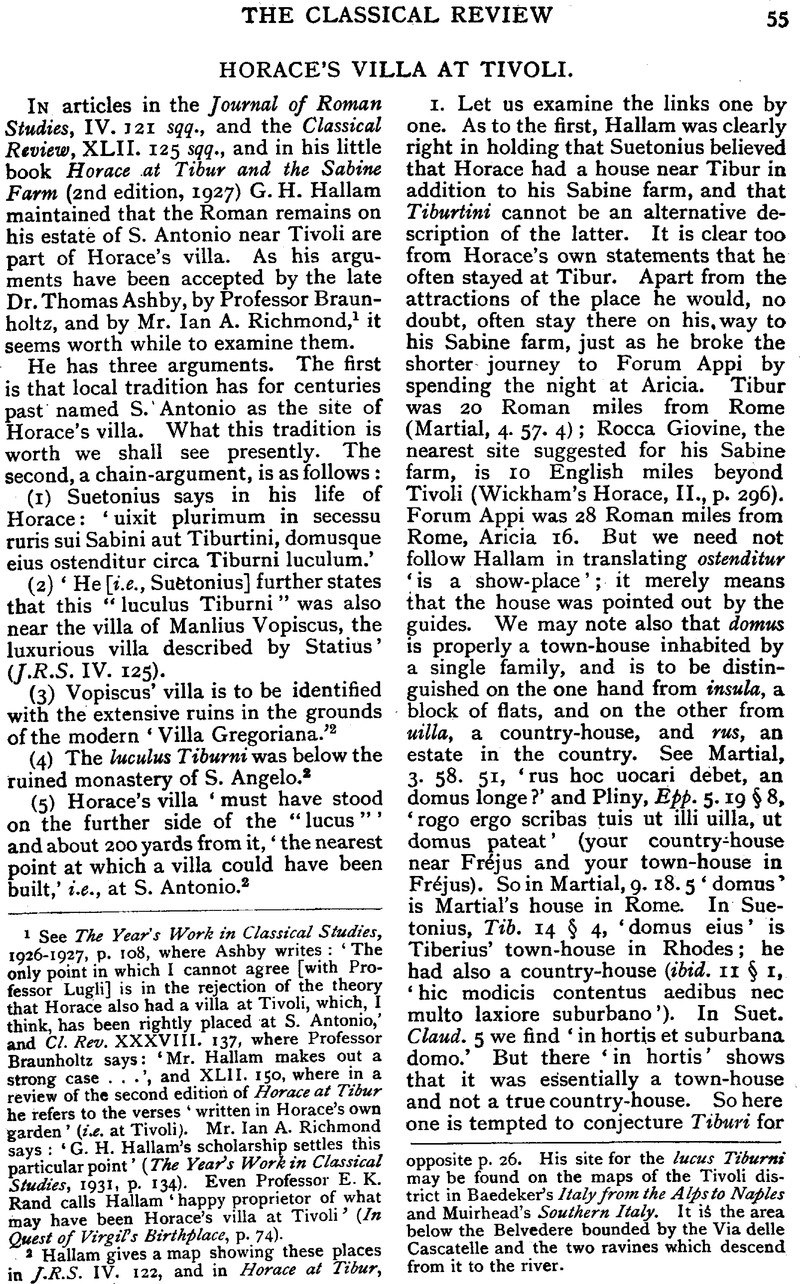 page 55 note 1 See The Year's Work in Classical Studies, 1926–1927, p. 108, where Ashby writes: ‘The only point in which I cannot agree [with Professor Lugli] is in the rejection of the theory that Horace also had a villa at Tivoli, which, I think, has been rightly placed at S. Antonio,’ and Cl. Rev. XXXVIII. 137, where Professor Braunholtz says: ‘Mr. Hallam makes out a strong case …’, and XLII. 150, where in a review of the second edition of Horace at Tibur he refers to the verses ‘written in Horace's own garden’ (i.e. at Tivoli). Mr.Richmond, Ian A. says: ‘G. H. Hallam's scholarship settles this particular point’ (The Year's Work in Classical Studies, 1931, p. 134). Even ProfessorRand, E. K. calls Hallam ‘happy proprietor of what may have been Horace's villa at Tivoli’ (In Quest of Virgil's Birthplace, p. 74).

page 55 note 2 Hallam gives a map showing these places in J.R.S. IV. 122, and in Horace at Tibur, opposite p. 26. His site for the lucus Tiburni may be found on the maps of the Tivoli district in Baedeker's Italy from the Alps to Naples and Muirhead's Southern Italy. It is the area below the Belvedere bounded by the Via delle Cascatelle and the two ravines which descend from it to the river.

page 56 note 2 Hallam says (J.R.S. IV. 125), ‘The “luculus” is, of course, the grove where King Latinus went to consult Faunus, as described by Virgil in the eighth book of the Aeneid: “Lucosque sub alta Consulit Albunea.”’ The reference should be to Aen. 7. 82. But if he had quoted the whole passage, he would surely have seen what the commentators, except Dr. Mackail, have failed to see, that this passage cannot possibly refer to Tibur. Virgil's words are: ‘oracula Fauni … adit lucosque sub alta consulit Albunea, nemorum quae maxima sacro fonte sonat saeuamque exhalat opaca mephitim.’ It would have struck him at once that there is no ‘saeua mephitis’ at Tivoli. The nearest ‘mephitis’ is at the sulphur-lakes, the ancient aquae Albulae, more than five miles from Tivoli on the plain below near Bagni (see Burn, Rome and the Campagna, pp. 360–1, and Gray's letter to West, 20 May, 1740, ‘a vile little brook that stinks like a fury’). At Tivoli the water of the Anio is charged, not with sulphur, but with carbonate of lime (ibid. 394). The true site of Virgil's Albunea was discovered long ago by Bonstetten. It was a wood with a sulphur-spring in it at the Zolforata, exactly five kilometers from Prattica, i.e. from Lavinium, the ancient city of the Laurentes (Probus on Georg. 1. 10 says ‘itaque etiam oraculum eius (sc. Fauni) in Albunea, Laurentinorum silua, est’). The wood is gone, but the spring with its effervescing water and its smell of rotten eggs is still there. Sonat appears to refer to the noise made by the explosions of gas in the water. Bonstetten, quoted by Carcopino, p. 340, says of the cavern near the pool ‘je la trouvai pleine de cette même eau bouillante, dont les pétillements fréquents, et le sifflement léger produisaient dans cette voûte mille bruits bizarres.’ Carcopino, p. 342, says: ‘les sources qui jaillissent dans le lac et dans la grotte n'ont pas cessé de faire entendre le petit fracas de leurs expulsions gazeuses’ (Carcopino, , Virgile et les Origines d'Ostie, pp. 338–344). That there should be two Albuneas is not surprising. Egeria had a spring at Lake Nemi (Strabo, p. 240) as well as near the Porta Capena.

page 59 note 1 ‘The names of many other celebrated Romans have been distributed at will by the local ciceroni among the numerous ruins which cover the neighbourhood, but there appears to be no evidence to prove that Maecenas, Syphax, Ventidius Bassus, or the rest of those enumerated by Kircher, ever had villas at or near Tiyoli’ (Burn, op. cit., p. 428). ‘The local guides have, to please travellers but without the slightest evidence in support of their assertions, dubbed them the villas of Catullus, of Horace, of Ventidius, of Quintilius Varus, of Maecenas, Sallust.… and other celebrated Romans’ (ibid. p. 399). In Gray's time they showed two houses of Horace. See his letter to West, 20 May, 1740.

page 60 note 1 By aquarum fragoribus in the latter passage is meant, I think, not ‘the roar of falling waters’ in a waterfall (J.R.S. l.c.), but the sound of fountains in a peristylium. The phrase naturally suggests the crash of a waterfall, but the context points rather to the luxury of a great mansion (per symphoniarum cantum–mero—in pluma).

page 61 note 1 Though I do not think highly of Hallam's arguments in defence of S. Antonio, I am not blind to the merits of Horace at Tibur. His account of Horace's Sabine farm is most useful and, as far as I can judge, very accurate. His discussion of the site of the Fons Bandusiae is valuable; to my thinking it settles the question and thereby helps to fix the site of Horace's farm. His photographs are charming, and there are some very useful plans.