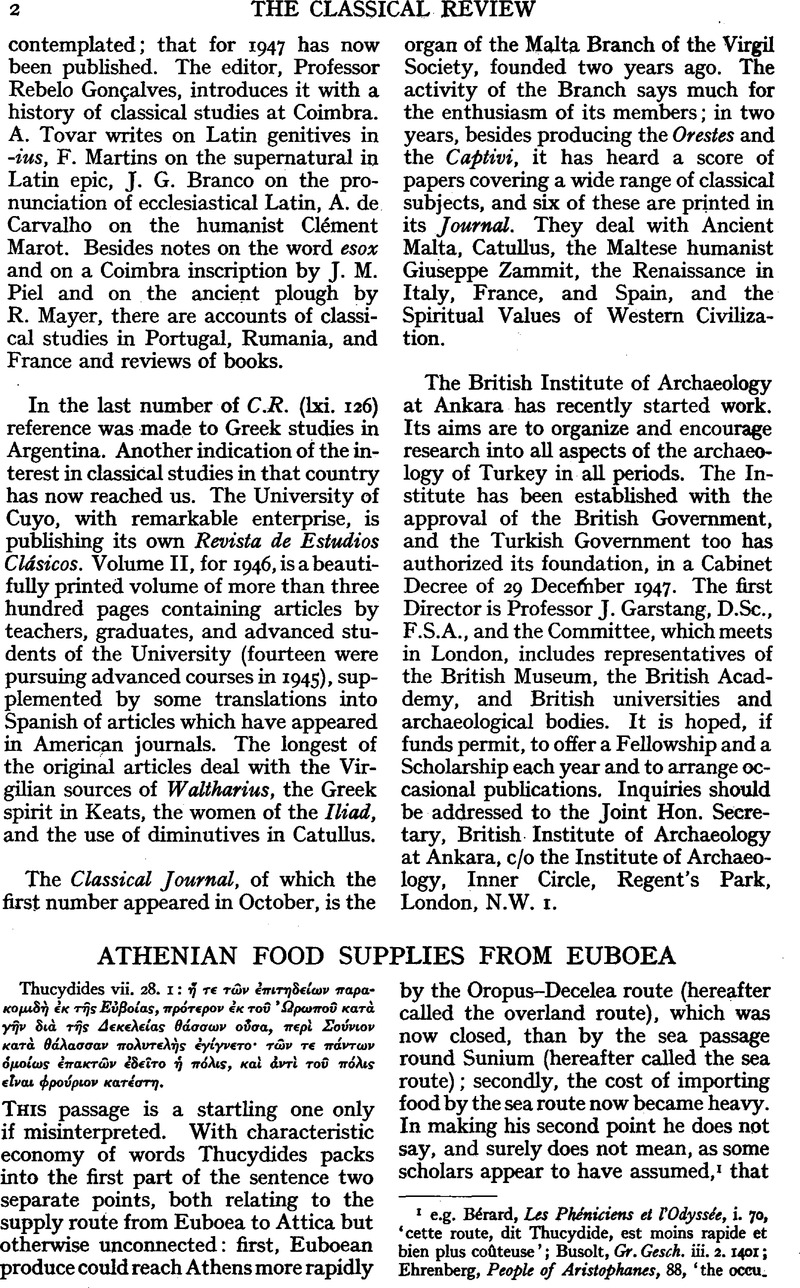 page 3 note 1 Glotz, , Ancient Greece at Work, 291–292, 295–6.Jardé, , Les Céréales dans l'Antiquité grecque, i. 196, reaches the remarkable conclusion that a convoy of 340 mules or 990 asses would be required to transport a single day's supply of grain for the urban population. But Thucydides does not say that supplies from Euboea had been imported exclusively by the overland route before the occupation of Decelea, nor is there any reason to believe that the urban population was ever forced to rely exclusively on Euboea for its grain.

page 3 note 2 Steup, n. ad loc., believes this phrase to be an independent addition to the catalogue of hardships imposed by the occupation of Decelea (though strangely he does not alter the colon after ⋯γ⋯γνετο to a full-stop), but it surely refers to the preceding words.

page 3 note 3 The view that Euboea was merely a transit point on the Pontic corn route (Grundy, Thucydides, 79) is incompatible with the evidence of Thucydides (cf. Aristoph. Wasps 715–18). According to Michell, Economics of Ancient Greece, 261–2, it was only during the Peloponnesian War that ships from Pontus passed through the Euboean channel and were unloaded at Oropus, the alleged diversion being ‘a war-time measure due to fear of enemy privateers’. It is, however, difficult to believe that these ships were safer sailing for many miles within sight of a hostile shore than by way of Aegean islands dominated by the Athenians (cf Thuc. ii. 67 4 on the dangers to which Athenian merchant shipping was exposed when coasting off the Peloponnese).

page 3 note 4 According to Kenny, , B.S.A. xlii (1947), 194–200, the slip-sheds of which some remains have been found on the promontory belong to Hellenistic times. They may, however, have superseded an earlier and less elaborate construction; it is difficult to see how the fortification of Sunium could have afforded protection to com ships (Σο⋯νιοντειχ⋯σαντες, ὅπως αὐτοῖς ⋯σφ⋯λεια ταῖς σιταγωγοῖςναυσ⋯ν εἴη το⋯ περ⋯πλου) unless warships were stationed there.

page 4 note 1 By this route, which climbs to a height of 2,100 feet, the distance from Oropus to Athens is about 30 miles. A traveller in the third century took a longer and more easterly road via Aphidna and the temple of Amphiaraus (Müller, , F.H.G. ii. 256 and G.G.M. i. 100); his reference to abundant facilities for rest and refreshment suggests that this had then become the normal route from Athens to Oropus. It is not clear why Chandler, L., J.H.S. xlvi (1926), 16, believes that the road through Aphidna ‘was the way by which the Athenian corn supplies were brought from Euboea’. It is true that a Peloponnesian force stationed at Decelea was in a position to prevent the use of both routes, but Thucydides mentions only the Decelea route in the passage quoted above (δι⋯ τ⋯ς Δεκελε⋯ας), and whereas the Persians withdrew from Attica to Boeotia through Decelea in 479 (Hdt. ix. 15.1), there seems to be no evidence from the fifth century that an important road passed through Aphidna.

page 4 note 2 Ehrenberg, op. cit. 275, n. 8, finds in I.G. i2. 40. 19–28 evidence of Athenian intentions to ‘keep down the price of transport via Oropos’. This inscription, however, which belongs to 446/5 and is discussed by Ziebarth, Beiträge zur Geschichte des Seeraubs und Seehandels, 123, does not appear to prove more than that the Athenians wished to facilitate communications with their new cleruchy at Histiaea.

page 4 note 3 The Spartans intended that their colony at Heraclea should serve as a base for attacks on Euboea (Thuc. iii. 92. 4), and this danger caused the Athenians some alarm (iii. 93. 1).

page 5 note 1 The supply route from Egypt was also threatened. Some months earlier an enemy squadron operating from Cnidus attempted to intercept Athenian merchant ships sailing from Egypt (35. 2–3), and while Rhodes was the headquarters of the Peloponnesian fleet (44; 60.2), this traffic may have had to be suspended.