“Banned in Boston”: Moral Reform Politics and the New England Society for the Suppression of Vice1 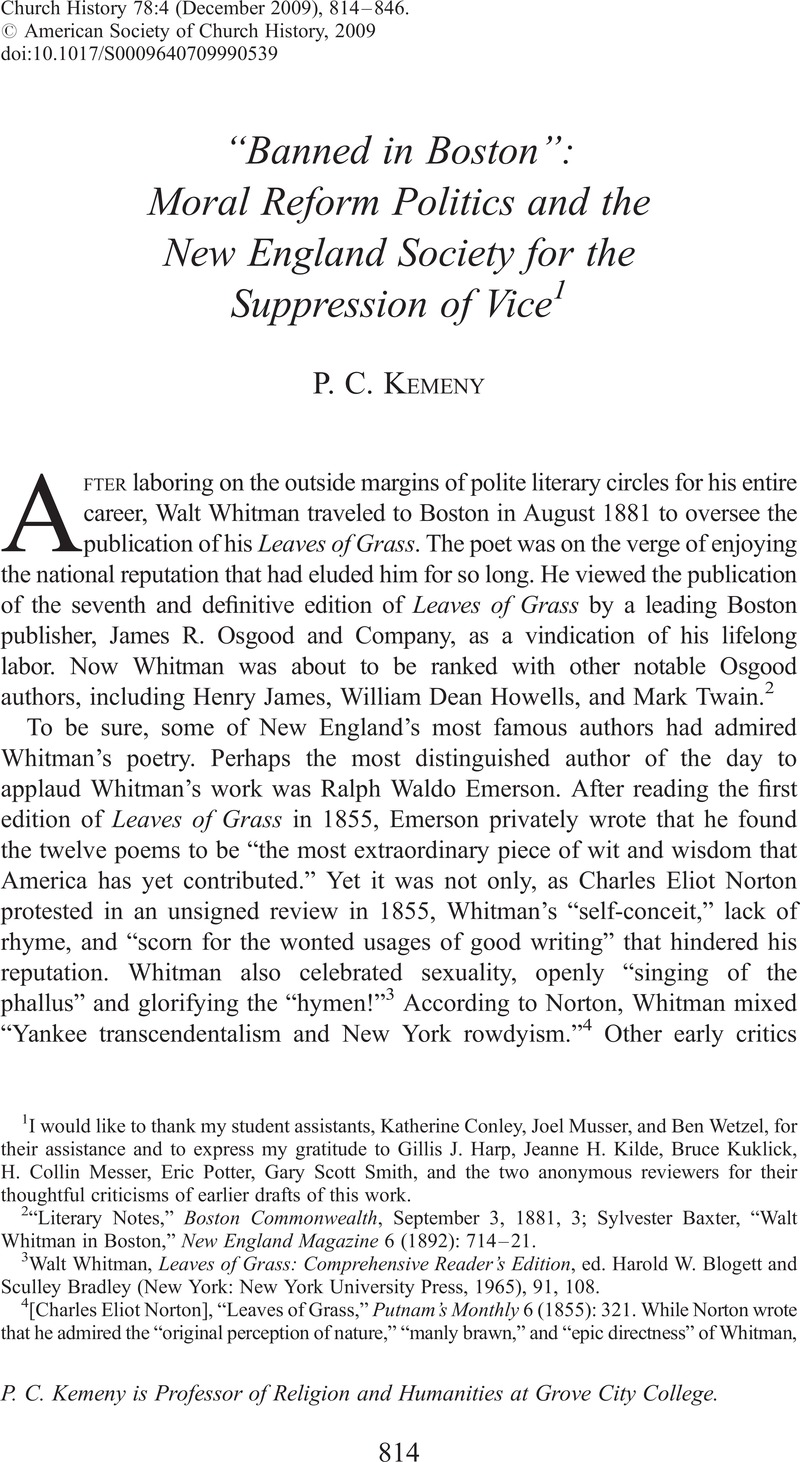 10 “Walt Whitman. A Poet's Supper to his Printers and Proof Readers.” [Camden Post], [18 October 1881], Walt Whitman—A Series of Twenty-Three Newspaper Items with Notes by the Post. Excerpts from the Trent Collection of Whitmaniana located in the Rare Book, Manuscript, and Special Collections Library Duke University.

21 Comstock, Anthony, Frauds Exposed, or How the People Are Deceived and Robbed, and Youth Corrupted; Being a Full Exposure of Various Schemes Operated Through the Mails, and Unearthed by the Author in a Seven Years' Service as a Special Agent of the Post Office Department and Secretary and Chief Agent of the New York Society for the Suppression of Vice (1880; repr., Montclair, N.J.: Patterson Smith, 1969), 391.

22 Appendix to the Congressional Globe: Containing Speeches, Reports, and the Laws of the Third Session Forty-Second Congress (Washington, D.C.: Office of the Congressional Globe, 1873): 297. At one level, the Comstock Act built upon previous legislation. The first federal law against obscene literature was the Tariff Act of 1842, which gave authority to customs officials to seize obscene material. During the Civil War, Congress had passed a law in 1865 against mailing obscene literature. In comparison to these two laws, the Comstock Act was more far-reaching in its scope. Moreover, as Hal Sears observes, the law neither defined obscenity nor specified “whether it intended to be solely a criminal statute (that is, concerned with seizing objectionable matter only as a contingency of the arrest of a violator) or whether it aimed to establish a civil post-office censorship separate from any criminal provisions of the law.” Sears, Hal, The Sex Radicals: Free Love in High Victorian America (Lawrence: Regents Press of Kansas, 1977), 71.

27 After the trial, Woodhull went on a lecture tour. A few years later she sailed for England, renounced free love, and married a British aristocrat. For an excellent analysis of the life and thought of Victoria Claflin Woodhull, see Frisken, Amanda, Victoria Woodhull's Sexual Revolution: Political Theater and the Popular Press in Nineteenth-Century America (Philadelphia: University of Pennsylvania Press, 2004).

32 Heywood, Ezra, Cupid's Yokes: The Binding Forces of Conjugal Love. An Essay to Consider some Moral and Physiological Phases of Love and Marriage, Wherein is Asserted the Natural Right and Necessity of Sexual Self-Government (Princeton, Mass.: Co-operative Publishing, 1877), 3, 12.

33 Ezra Heywood, letter to the editor, Boston Commonwealth, reprinted in The Word, December 1877, 3.

45 Robinson, Principles and Practice of Morality, 199, no. 1. According to Seelye, “God, in nature, has surrounded” the sexual passion “by the many checks and safeguards of the native modesty and previous estimate of virtue in the pure, the public disgrace and self-reproach which attaches to the impure, the most inveterate and loathsome diseases which follow in its train, and the debasing of every refined sensibility which follows on the loss of sexual virtue.” Seelye, A System of Morals, 51.

51 Robinson, Principles and Practice of Morality, 205.

53 Ezra Heywood, Social Ethics: An Essay to Show that, Since the Right of Private Judgment Must be Respected in Morals, as well as in Religion, Free Rum, the Conceded Right of Choice in Beverages, and Required Power to Decline Intoxicants Promotes Rational Sobriety and Assures Temperance (Princeton, Mass.: Co-operative Publishing, n.d.), 5. One of the chief reasons that the state “must be made unnecessary,” Benjamin R. Tucker argued in the initial issue of his periodical, Liberty, was that the state “stifles thought.” Tucker, Benjamin R., “Our Purpose,” Liberty, August 6, 1881, 1. On Tucker and individualist anarchy, see McElroy, Wendy, The Debates of Liberty: An Overview of Individual Anarchism, 1881–1908 (Landam, Md.: Lexington Books, 2003); Coughlin, Michael E. and Hamilton, Charles H., eds., Benjamin R. Tucker and The Champions of Liberty: A Centenary Anthology (St. Paul, Minn.: Michael E. Coughlin and Charles H. Hamilton Publishers, 1975). On Heywood's view of society, see also Blatt, Free Love and Anarchism, 56.

57 For example, William Jewett Tucker, who was president of the New England Society in the early 1890s, was tried for heresy in the 1886 at Andover Seminary. His acquittal signaled the victory of the New Theology over Edwardsean Calvinism in the Congregational Church. Phillips Brooks's 1891 election as Episcopal bishop of Massachusetts likewise marked the triumph of the Broad Church theology in that denomination. Williams, Daniel Day, The Andover Liberals: A Study in American Theology (New York: King's Crown Press, 1941); Harp, Gillis, Brahmin Prophet: Philips Brooks and the Path of Liberal Protestantism (Lanham, Md.: Rowman and Littlefield, 2003).

73 Traubel, With Walt Whitman, 1:150–51. Despite his objections to expurgation, Whitman had a hand in, or at least approved, four different expurgated editions of Leaves of Grass. Falsom, Ed, “Leaves of Grass, Junior: Whitman's Compromise with Discriminating Tastes,” American Literature 63 (1991): 641–63.

83 Sprague, Homer B., “Societies for the Suppression of Vice,” Education 3 (1882): 74. At the height of the Leaves of Grass controversy, one moral reformer wrote: “The passions are normally and gradually developed in man as in the lower animals; but the brutes are under no restraint. Instinct, impulse, and opportunity determine their actions. Yet, as passion strengthens, it stimulates the imagination. Marriage, only, affords legitimate gratification. Lust, indulged in thought or deep apart from love, is moral impurity; sexual love with lust, apart from wedlock, is the spirit of adultery. This is the strain placed by God, human nature, and law, upon man.” Buckley, J. M., “The Suppression of Vice,” North American Review 134 (1882): 495–96.

93 Kuebrich, Minor Prophecy, 21. Whitman once described Leaves of Grass to Traubel as a “New Bible.” Complete Writings, 9:6. According to Kuebrich, the role of religion in Leaves of Grass is best understood not as one theme among others but constituting “a coherent world view that informs the other themes and integrates them with one another.” As such, he notes, Leaves of Grass is designed “to emancipate the human subject and promote his or her development. After announcing himself as a saving prophet in ‘Song of Myself,’ Whitman immediately leads the reader through two sequences: ‘Children of Adam,’ designed to sanctify the body and liberate heterosexual passion; and ‘Calamus,’ designed to liberate men from emotional repression, call for new levels of male intimacy, and united the soul with God… . he presents a vision of a loving God who not only provides for evolutionary and historical progress but also personal immortality and the soul's ongoing development in the afterlife.” Kuebrich, Minor Prophecy, 10; Kuebrich, “Religion,” Walt Whitman: An Encyclopedia, 583.

94 Whitman, , Complete Poetry and Collected Prose (New York: Library of America, 1982), 1332, quoted in Reynolds, Walt Whitman's America, 238. Whitman once told Traubel that “the negative virtues of the churches are the most menacing, to me the most abhorrent, of all professed virtues… . The morals of the churches: they might be morals if they were not something else: I have always looked about to discover a word to describe the situation: how Jesus and the churches have got divorced: how the institution has destroyed the spirit.” Traubel, With Walt Whitman, 1:97–98.

99 Whitman, Walt, “A Memorandum at a Venture,” North American Review 134 (1882): 546–48. To Whitman's dismay he could not shake the association with erotic literature. Apparently people wrote Whitman letters or sent him writings that were obscene. He got one such letter and showed it to Traubel and said: “It has always been a puzzle to me why people think that because I wrote Children of Adam, Leaves of Grass, I must perforce be interested in all the literature of rape, all the pornograph [sic] of vile minds. I have not only been made a target by those who disposed me but a victim of violent interpretation by those who condoned me. You know the sort of stuff that's sent to me here.” Traubel, With Walt Whitman, 4:119.

123 Whitman, “A Memorandum at a Venture,” 548. For other evidence of Whitman's critic of free love views of marriage, see Reynolds, Walt Whitman's America, 223–24.

126 Goodheart, Lawrence B., “The Ambiguity of Individualism: the National Liberal League's Challenge to the Comstock Law,” in American Chameleon: Individualism in Trans-National Context, ed. Curry, Richard O. and Goodheart, Lawrence B. (Kent, Ohio: Kent State University Press, 1991), 133–50, quotations are on 145. At the National Liberal League meeting in 1878 just before he resigned, Ingersoll said: “I believe that the family is the unit of good government, and that every good government is simply an aggregation of good families. I therefore not only believe in perfect civil and religious liberty, but I believe in the one man loving the one woman.” Ingersoll, Robert, “Convention of the National Liberal League,” The Works of Robert G. Ingersoll, 12 vols. (New York: Dresden, 1909), 12:233–35. On Abbot and the controversy within National Liberal League over free love, see Ahlstrom, Sydney and Mullin, Robert Bruce, The Scientific Theist: A Life of Francis Ellingwood Abbot (Macon, Ga.: Mercer University Press, 1987), 11–27.

129 According to Reynolds, the Leaves of Grass edition produced by the Philadelphia publisher Rees, Welsh and Company quickly went through five printings by the end of 1883. In December of that year, Whitman received a royalty check for more than $1,200. Reynolds, Walt Whitman's America, 543–44.

1 I would like to thank my student assistants, Katherine Conley, Joel Musser, and Ben Wetzel, for their assistance and to express my gratitude to Gillis J. Harp, Jeanne H. Kilde, Bruce Kuklick, H. Collin Messer, Eric Potter, Gary Scott Smith, and the two anonymous reviewers for their thoughtful criticisms of earlier drafts of this work.

P. C. Kemeny is Professor of Religion and Humanities at Grove City College.

“Banned in Boston”: Moral Reform Politics and the New England Society for the Suppression of Vice1