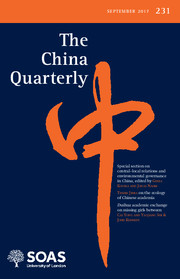 Special Section on Central–Local Relations and Environmental Governance in China