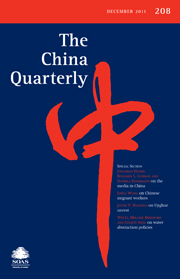 Foreword by the Incoming Editor

Special Section on the Chinese Media