The forthcoming World Congress of Neurology reflects the expanded agenda:

In addition to these world leaders in the basic and clinical brain sciences, neurologists from around the world will participate, including a new generation of Chilean and Latin American neurologists.

In recognition of the changing nature of our specialty, Morris Freedman, Canada’s delegate to the World Federation of Neurology and I are organizing a course on “Careers in Neurology in a Globalizing World” in collaboration with Professor Ricardo Nitrini from Brazil.

Imagine a city at the feet of snowcapped peaks, surrounded by splendid vineyards and hosting a thriving neurological community and you will have glimpsed Santiago. Renato Verdugo, President of the Congress, and his colleagues know that they have a once in a life opportunity to host world neurology and they will let their hospitality shine.

Cultural, social and networking events are planned as well as opportunities for pre- and post-Congress tours ranging in destinations from the dry desert north to the lake rich south with great culinary, cultural and landscape variety in between.

Canada hosted the 1993 World Congress of Neurology in Vancouver organized by Donald Paty and many colleagues from across Canada. Lord Walton of Detchant was President of the World Federation of Neurology and Henry HJM Barnett was the honourary President. Many good things flowed from that Congress. We showed what we were doing and learned what others were doing. Friendships, exchanges and collaborations bloomed and the profits of the Congress became the cornerstone capital for a brain foundation. 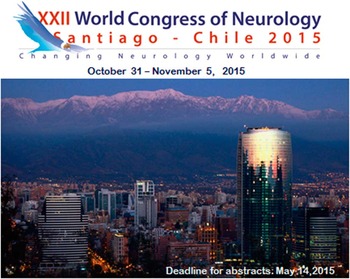 It may be time for Canadian brain professionals to begin preparing for a bid to host the 2021 World Congress of Neurology, which has become much more than that. The site for 2017 will be in Kyoto, Japan but, if we are to succeed in what has become a very competitive field, we must begin with a strong presence in Santiago.

Come to Santiago and be enlightened, entertained and inspired.

Vladimir Hachinski does not have anything to disclose.