Despite decades of research, the rate of cerebral spinal fluid (CSF) shunt failure for pediatric hydrocephalus remains high.Reference Riva-Cambrin, Kestle and Holubkov1 The most common cause of CSF shunt failure is proximal shunt obstruction, often due to underlying brain tissues, cells, or inflammatory debris.Reference Harris and McAllister2 Choroid plexus (CP) is recognized as a major cause of proximal CSF shunt obstruction.Reference Harris and McAllister2 When replacing a CSF catheter, the neurosurgeon must consider the possibility of CP as the cause of obstruction; removal of hardware without proper preparation and cauterization may result in avulsion of the underlying, well-vascularized CP, thus causing intraventricular hemorrhage.Reference Hanak, Bonow, Harris and Browd3 Despite its clinical relevance, radiological imaging revealing overt CP obstructing the proximal catheter tip has, to our knowledge, not been well highlighted in the literature. Here, we provide radiological demonstration of CP causing proximal shunt malfunction in an 18-month-old boy.

An 18-month-old boy known for a Chiari II malformation with shunted hydrocephalus was seen in clinic for progressive macrocrania. Shunt series and ophthalmologic exam were within normal limits. A cerebral MRI was performed and compared with previous imaging and showed an increase in ventricular dilation caused by hypo-intense CP on T2-weighted MRI obstructing an otherwise clear proximal catheter tip in the occipital horn of the left lateral ventricle (Figure 1.) The patient was taken to the operating room for proximal shunt revision. Resistance was felt while attempting to remove the catheter tip, due to the underlying CP. The tissue was cauterized using a monopolar on the shunt stylet. Upon cauterization, CSF flow through the catheter increased substantially suggesting the CP retracted from the catheter and the catheter was removed with slight resistance. Despite the coagulation, significant bleeding was observed from the insertion site after catheter removal. Ventricular endoscopy was then performed through the same burr hole and showed considerable ventricular hemorrhage (Figure 2) which was subsequently removed endoscopically. After homeostasis was achieved, a new ventricular catheter was inserted and connected to the valve. Inspection of the removed catheter was remarkable for CP both enveloping the tip and entering it (Figure 3). Post-operative course was uneventful, although the patient was kept for observation for four days because of the intraventricular hemorrhage. 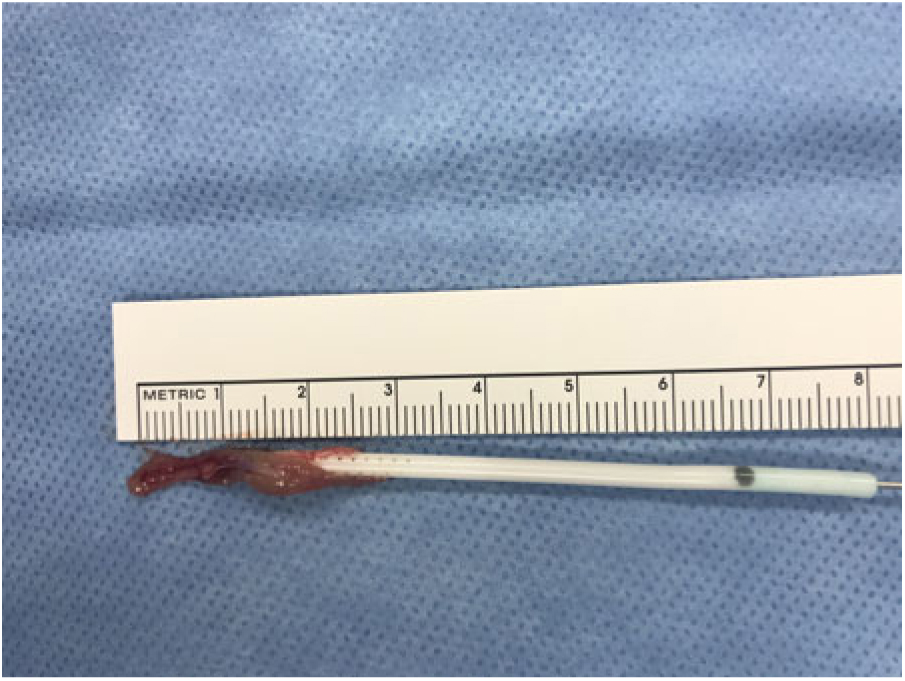 Figure 3: Gross view of CP (after operative catheterization) enveloping and entering the orifices of the obstructed proximal ventricular catheter tip.

CP is a frequently cited cause of obstructive, non-infectious shunt dysfunction.Reference Harris and McAllister2 However, radiological demonstration of CP obstruction has not been well demonstrated in the literature, suggesting that it may be a rare finding. One case report captured the process of occlusion in a neonate, showing real-time sonographic transient occlusion of the ventricular catheter tip by CP.Reference Mao, Agarwal, Zuccoli and Tyler-Kabara4 In a 2012 study by Singh and colleagues providing in-vivo endoscopic observations in 53 patients (mean age 13.3 years, range from 2 months to 60 years) undergoing endoscopic third ventriculostomy for shunt dysfunction, CP was seen blocking the catheter in 4 (7%) patients.Reference Singh, Saxena, Jagetia, Singh, Tandon and Ganjoo5 Our report adds to these findings, demonstrating the radiological appearance of CP causing CSF shunt dysfunction on MRI (Figure 1). The intraventricular hemorrhage which occurred in this patient despite coagulation of the plexus highlights the importance of its preoperative recognition and/or intraoperative identification.

All authors contributed equally to the manuscript.

The authors have no conflicts of interest relevant to this article to disclose.