An 85-year-old right-handed male presented to the emergency room with chest pain and elevated cardiac enzymes. He was diagnosed with myocardial infarction, but no interventional therapy was offered as a result of life-limiting malignancy – 4 months prior, he was diagnosed with high-grade glioma for which he refused treatment and was followed at home by a palliative care physician.

The patient had a past history of right-sided, medically refractory trigeminal neuralgia. He presented initially with episodes of severe, lancinating right-sided facial pain and continued to have symptoms despite treatment with carbamazepine. The decision was made to undergo stereotactic radiosurgery. He was treated with 60 Gy of CyberKnife radiosurgery in April 2013 (see Figure 1 for radiation planning images). The radiation was predominantly delivered to the right preganglionic trigeminal nerve, with 14 Gy targeted to the Gasserian ganglion. His initial response was positive despite some mild hemifacial numbness. After progression of symptoms 2 years later, he was having up to 15 episodes of pain daily. Repeat magnetic resonance imaging (MRI) at the time was unremarkable. He underwent an additional 50 Gy of irradiation to the right Gasserian ganglion in December 2015 (see Figure 1 for radiation planning images) and unfortunately developed significant right hemifacial numbness in V 1-3. His pain continued to progress and became more constant rather than episodic. 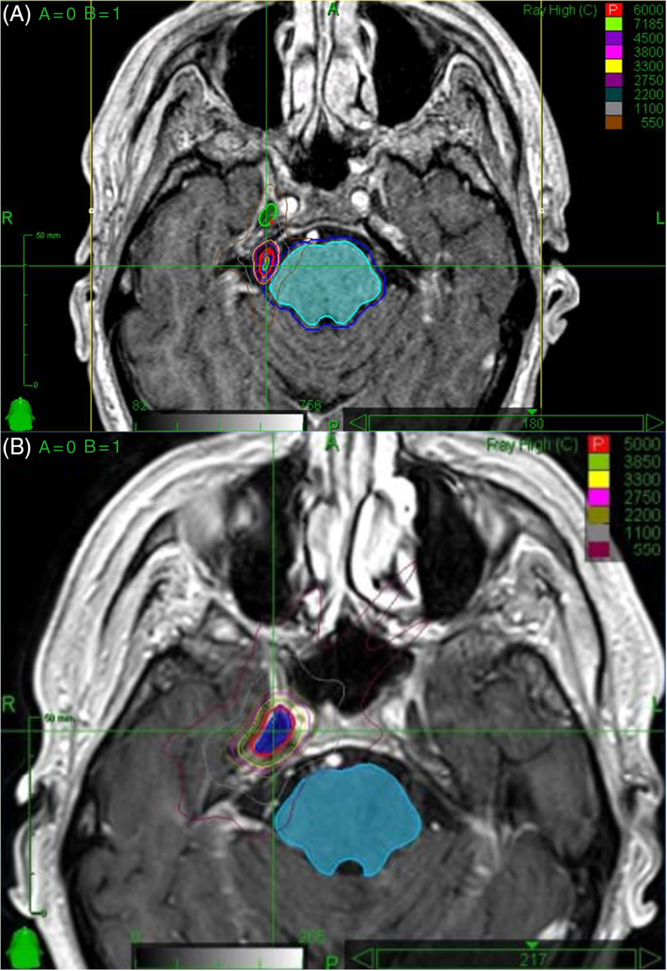 In April 2017, the patient presented with dysarthria and right-sided weakness; a diagnosis of acute ischemic stroke was made. The patient experienced some improvement in the emergency room, and tissue plasminogen activator was not administered. MRI (Figure 2) incidentally revealed a right temporal fluid-attenuated inversion recovery (FLAIR) hyperintensity. A follow-up MRI 10 months later in March 2018 (Figure 2) revealed a new ring-enhancing lesion within this area. Given the interval development, the patient was diagnosed with presumed high-grade glioma. At this time, his symptoms included constant right-sided facial pain, right hemifacial numbness in V 1-3, and a mild facial droop. 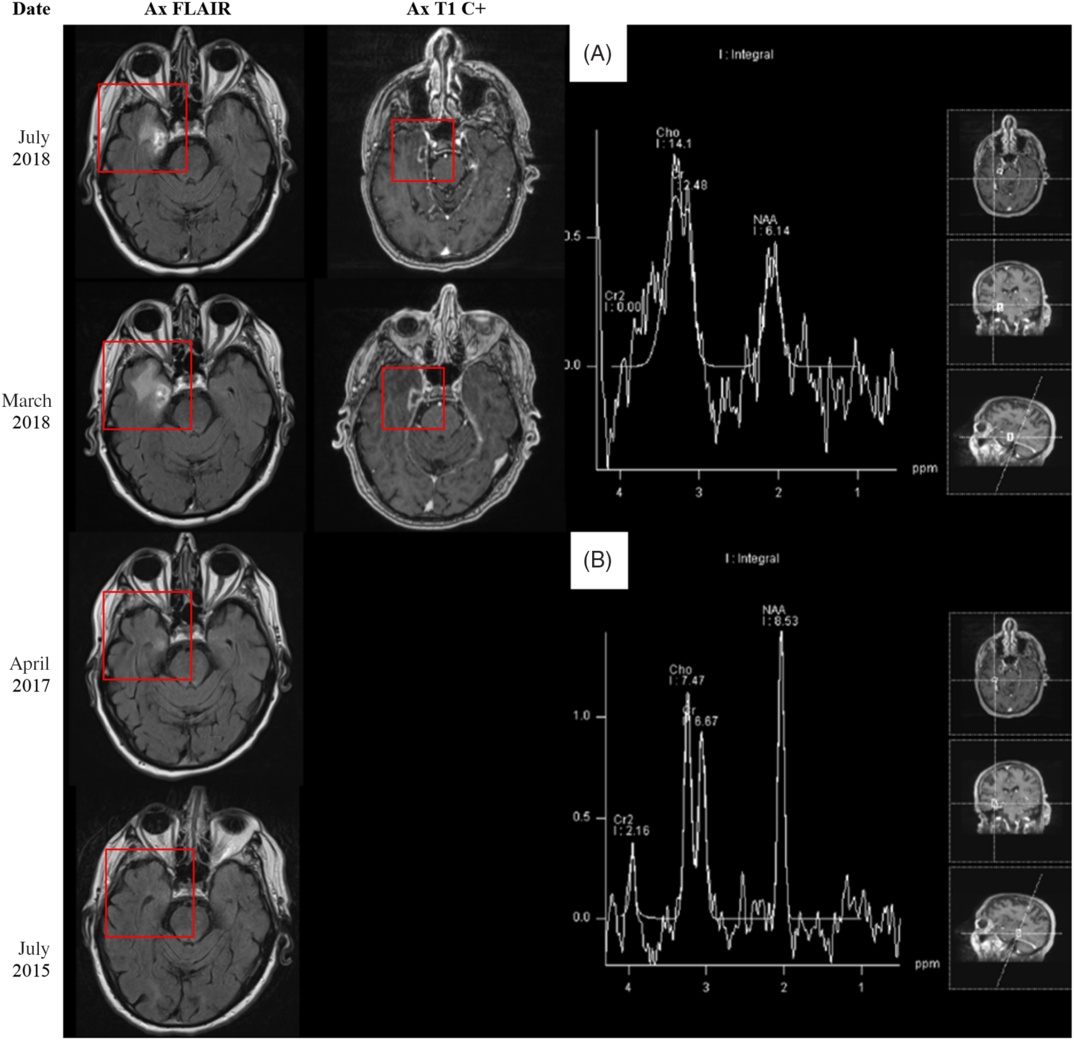 Several months after this diagnosis, the patient presented to the emergency room with non-ST-elevation myocardial infarction. He was admitted for medical management of his coronary disease. A thorough review of the patient’s past medical history, presentation, and imaging was performed by the treating team (AW, TS, MM). In particular, the history of stereotactic radiosurgery to the right Gasserian ganglion followed by the evolution of a ring-enhancing lesion in the mesial temporal lobe warranted further exploration.

Repeat MRI demonstrated marginal interval decrease in the peripheral enhancement and vasogenic edema of the temporal lesion. At this point, the possibility of radiation necrosis rather than high-grade glioma was entertained. The patient refused all interventions, including a stereotactic biopsy for tissue diagnosis. A noninvasive approach – magnetic resonance spectroscopy (MRS) – was pursued for better characterization of the lesion (Figure 2). On MRS, there was decreased N-acetyl-aspartate (NAA) within the involved region of abnormal contrast enhancement. The choline (Cho) levels remained within relatively normal limits with respect to both ipsilateral normal brain parenchyma and creatine (Cr) levels as a reference standard. These findings suggested decreased neuronal activity without significant elevation of cell membrane turnover, resulting in relatively preserved Cho/Cr ratio but increased Cho/NAA ratio in the region of interest. Although, in radiation necrosis, one would expect to see a slight decrease in both NAA and Cho, the lack of significant increase in Cho still favors radiation necrosis over high-grade glioma.

After a thorough discussion with the patient and his family about the natural history of radiation necrosis compared to high-grade glioma, the patient no longer wished to be palliated and instead pursued active intervention for his ongoing chest pain. He underwent percutaneous coronary intervention on an urgent basis and received three stents resulting in resolution of his cardiac symptoms. He was discharged home later that week.

At 2-month follow-up, the patient refused to undergo repeat imaging due to claustrophobia. Clinically, he remained well with no new symptoms or examination findings suggestive of progression of his neurological disease. At 7-month follow-up, he had discontinued dexamethasone and had no further symptoms.

A literature review identified one previously reported case of radiation necrosis following stereotactic radiosurgery for trigeminal neuralgia.Reference Montoure, Zaidi, Sheehy, Shetter and Spetzler5 In Montoure et al.’s report, the patient had undergone TomoTherapy for trigeminal neuralgia 1 year prior to the development of a ring-enhancing lesion in the mesial temporal lobe (Table 1). The authors performed a supratotal resection of the lesion and a final diagnosis of radiation necrosis was made based on histological examination. When comparing the two cases, a number of differences and similarities are noted. Both patients were treated with stereotactic radiosurgery for refractory trigeminal neuralgia. Montoure et al’s case involved a total of 40 Gy of TomoTherapy radiation in two equally divided doses; our patient underwent a total dose of 110 Gy of CyberKnife radiation divided in two unfractionated doses 2 years apart; the mesial temporal lobe, depending on the location, received up to 5.5 Gy on the first treatment and up to 33 Gy in the second treatment – after analyzing the radiosurgery treatment plans, it appears that the area of suspected radiation necrosis likely received minimal radiation from the first treatment and up to 11 Gy from the second treatment (Figure 1). Both patients developed symptoms within 1–2 years. MRI findings were nearly identical. Montoure et al.’s case was diagnosed with tissue biopsy, while this case was diagnosed by a combination of clinical characteristics and radiographic evidence (MRI and MRS). A comparison is summarized in Table 1.

In summary, radiation necrosis is a complication of stereotactic radiosurgery that can present similarly to other entities such as high-grade glioma and is important to recognize in any patient who has had radiation to the central nervous system. Our report highlights the importance of recognizing this rare but important entity. 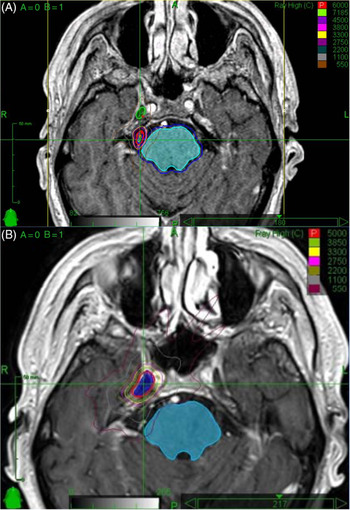 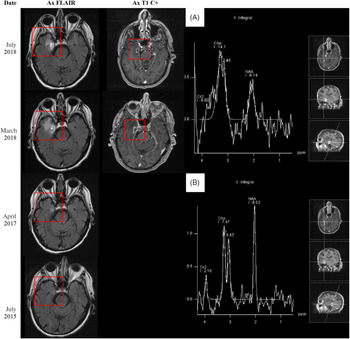