We report a case of a 56-year-old, right-handed woman with short-term memory impairment after clipping of an incidentally discovered 6-mm anterior communicating artery aneurysm. She quit smoking five months before surgery after a 30 pack-year smoking history. Her previous medical history was otherwise notable for depression, for which she had been prescribed fluoxetine. Her father died secondary to rupture of a cerebral aneurysm. She was not deemed suitable for coiling based on the preoperative CT angiogram. Her preoperative neurological examination was normal.

Her postoperative course was marked by disorientation and short-term memory impairment for which the neurology service was consulted. The patient’s attention and working memory were intact. However, her recent memory including events from the past several months was impaired. For example, she could not recall events relating to recently deceased relatives and pets. She kept repeating questions pertinent to her hospital stay, demonstrating comprehension for the answers but promptly forgetting both asking the questions and receiving the answers. Montreal Cognitive Assessment score was 24/30.

Her bloodwork was unremarkable except for a sodium level of 122 mmol/L. Both CT and MRI images of the brain were acquired to further evaluate her memory impairment. Cerebral infarction of the anterior columns of both fornices was demonstrated on MRI and, in retrospect, was also discernible on CT (Figures 1–3).

Acute short-term memory loss and cognitive behavioral changes are well described in the literature after surgical manipulation of an anterior communicating aneurysm.Reference Thomas, Koumellis and Dineen 1 However, in most cases, these findings are not attributable to an infarct or specific lesion and instead are due to damage to the precommissural area.Reference Taren 2 The septohippocampal pathways that pass through the fornix in this area can be damaged by surgical manipulation or hemorrhage of an anterior communicating artery aneurysm.Reference Taren 2 In our case, the findings of anterograde memory loss can be attributed to the bilateral forniceal infarction described previously.

Anterior communicating artery syndrome, which has previously been described in the literature, is characterized by severe amnesia, personality changes, and confabulation.Reference Bottger, Prosiegel, Steiger and Yassouridis 3 Interestingly, our patient’s presentation was of marked short-term memory loss with some evidence of personality changes but no sign of confabulation. Anterior communicating artery syndrome is generally attributed to ischemia in the vascular territory of the subcallosal artery, a 0.5-mm terminal artery arising from the posterior aspect of the anterior communicating artery that supplies the anterior columns of the fornix bilaterally.Reference Mossiman, Saint-Maurice, Lenck, Puccinelli and Houdart 4 The hypothalamic and chiasmatic perforators also arise from the posterior aspect of the anterior communicating artery, although because of their dual supply, they are almost never responsible for an amnestic syndrome.Reference Mossiman, Saint-Maurice, Lenck, Puccinelli and Houdart 4 The fornix itself derives its main vascular supply from the short medial central arteries, which are branches of the anterior cerebral arteries.Reference Moudgil, Azzouz, Al-Azzaz, Haut and Gutmann 5 It is possible that a retraction injury of either of the medial central arteries or the subcallosal artery could cause a bilateral forniceal infarction.

Surgical principles dictate that prevention of any complication is generally possible when there is adequate exposure of the vessels and structures that could cause such a complication. In this case, although precautions were taken to avoid injury or retraction of the perforating vessels, the most likely cause of the bilateral forniceal infarction remains inadvertent intraoperative injury to the subcallosal artery. The proximity of the origin of this artery to an anterior communicating artery aneurysm suggests the possibility of arterial injury during a surgical procedure in which this aneurysm was clipped.Reference Mugikura, Kikuchi and Fujii 6

Our patient initially demonstrated marked improvement in her memory deficits, but experienced only mild subsequent improvement over long-term follow-up. She also described symptoms of anosmia, which became more obvious once her memory deficits began to resolve, likely indicating basal forebrain involvement in keeping with either injury to the olfactory tracts or ischemic disruption of the septohippocampal pathways.Reference Hattingen, Rathert and Raabe 7 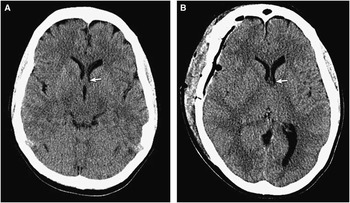 Figure 1 Axial unenhanced CT images both before (A) and after (B) anterior communicating artery aneurysm clipping. (A) Presurgery, the normal fornix is isodense to gray matter (arrow). (B) Postsurgery, the fornix is hypoattenuating (arrow) in keeping with infarction.

Dr. Sahlas is supported by the MG DeGroote Professorship in Stroke Management, McMaster University. The authors thank Dr. Mary M. Chiavaras for assistance in preparing the radiographic images for publication.