Cerebral microbleeds (CMBs), visualized on gradient-recalled echo (GRE) T2 or susceptibility-weighted imaging magnetic resonance imaging (MRI) sequences, and thought to reflect minor leakage from fragile arterial micro-vessels, are classically considered to be clinically silent. They are frequent incidental findings in MRI scans of healthy subjects, especially in the elderly population and even more prevalent in patients with acute ischemic and hemorrhagic stroke. However, increasing evidence has called into question the asymptomatic nature of CMBs. In particular, they appear to be associated with an increased risk of incident ischemic and hemorrhagic strokes as well as recurrent strokes.Reference Loitfelder, Seiler, Schwingenschuh and Schmidt 1

Greater controversy surrounds the possibility that CMBs can cause acute stroke-like episodes. In fact, CMBs are often associated with a degree of surrounding tissue necrosis;Reference Shoamanesh, Kwok and Benavente 2 however, in theory, the brain tissue damaged by an acutely developing CMB is too small to produce focal neurological symptoms. Nevertheless, a few case reports of acute focal deficits with negative diffusion-weighted imaging (DWI) brain-MRI sequences seem to suggest that a strategically located CMB could, indeed, cause an acute stroke syndrome.Reference Teo, Ramadan and Gregoire 3 These few published reports have invariably described patients with classical risk factors for small vessel disease.

We report a case of a 50 year-old right-handed man with no known vascular risk factors presenting with sudden onset of severe headache, vertigo, nausea, photophobia and horizontal diplopia. His past medical history was remarkable for migraine with aura and some transient stroke-like episodes. His mother died in her early fifties after suffering several “strokes”. Neuro-ophthalmological examination early after onset of symptoms revealed left hypertropia, clockwise torsion of the eyes, right head tilt, counter-clockwise rotatory nystagmus and upbeat nystagmus in primary position. This was interpreted prior to the MRI as consistent with an ocular tilt reaction (OTR) possibly due to a lesion in the left rostral midbrain. 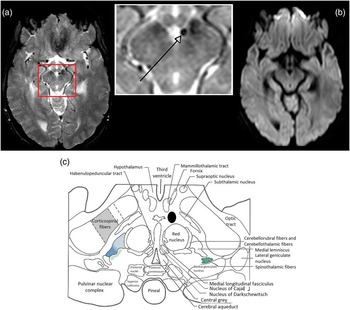 The patient had completely recovered at clinical follow-up six-months later. Follow-up brain MRI (with high-resolution axial T2 TSE with 3 mm slice thickness and 0.1 mm interslice gap) performed at the same time did not show any lacunar infarct that could have been missed on the initial MRI and confirmed the persistence of the previously identified CMB. Given the presence of a CMB in a location corresponding to the clinical syndrome, we can reasonably argue that this radiological finding might be causally associated with his acute neurological presentation.

Although CMBs are not usually considered CADASIL-specific radiological features, they are found in 31 to 69% of CADASIL patients, and are associated with an increased risk of intracerebral hemorrhage and cognitive decline, especially executive dysfunction.Reference Choi, Kang, Kang and Park 4 Nonetheless, the direct lesion-related effect of CMBs in stroke-like manifestations of CADASIL is still largely unknown. Our patient presented acute focal deficits consistent with a stroke of the posterior circulation, without evidence of a focal ischemic lesion on early post-onset brain MRI.

We acknowledge some potential limitations of our case report. First, we do not have an MRI scan preceding the clinical presentation to confirm that the CMB is acute. It is also possible that a very small lacunar infarction would have remained undetected using our conventional DWI sequence. High-resolution diffusion has been shown to increase the sensitivity for ischemic lesions, especially for cortical lesions.Reference Benameur, Bykowski, Luby, Warach and Latour 5 Diffusion-negative infarcts are more likely with lacunar infarction and posterior circulation lesions.Reference Sylaja, Coutts, Krol, Hill and Demchuk 6 In patients with persistent neurological deficits but a DWI-negative study, repeat MRI may show a delayed appearance of DWI lesions.Reference Hotter, Kufner, Malzahn, Hohenhaus, Jungehülsing and Fiebach 7 However, in the current case, follow-up high-resolution MRI acquisition performed six months later did not reveal an infarct in this location. Finally, the presumed symptomatic CMB is not exactly centered on the left Interstitial Nucleus of Cajal (INC), as generally expected in cases of right OTR. However, a case has been described of a patient with torsional nystagmus following a lesion in the ventral mesencephalic region between the red nucleus and the third nerve rootlets but without involvement of the INC.Reference Helmchen, Rambold, Kempermann, Buttner-Ennever and Buttner 8

While acknowledging these limitations, this case supports the notion that CMBs can occasionally cause acute focal neurological deficits. Most likely, neurological dysfunction might be due to some tiny tissue necrosis surrounding the symptomatic CMB, strategically located in a densely packed area such as the brainstem. Possible alternative mechanisms include focal seizure-like activity or migraine aura-like cortical spreading depression, as hypothesized in a few studies reporting characteristic transient focal neurological episodes in cortical CMBs associated with cerebral amyloid angiopathy.Reference Charidimou, Peeters and Fox 9 This observation suggests a novel potential non-ischemic mechanism underlying the clinical spectrum of CADASIL disease.