The Australian Journal of Rehabilitation Counselling 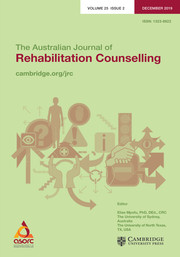