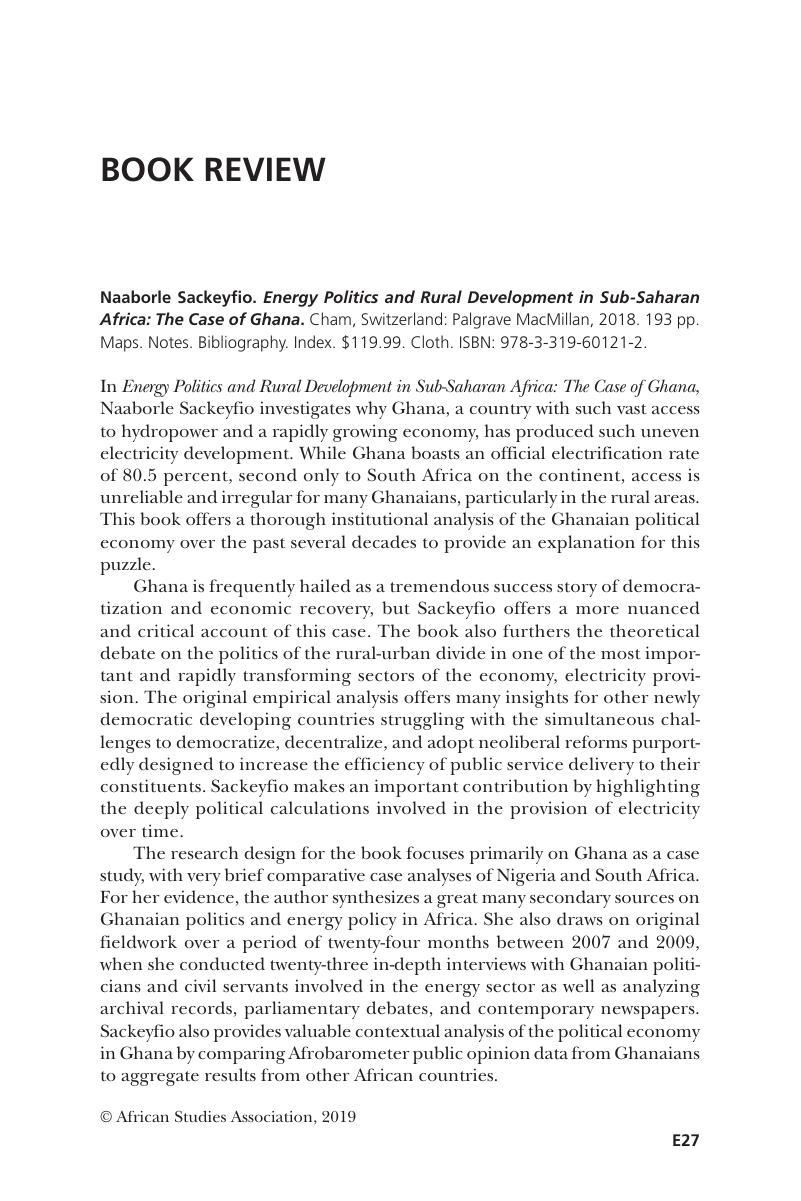 An abstract is not available for this content so a preview has been provided. To view the full text please use the links above to select your preferred format.
Type
Book Reviews (Online)
Information
African Studies Review , Volume 62 , Issue 4 , December 2019 , pp. E27 - E29
DOI: https://doi.org/10.1017/asr.2019.35[Opens in a new window]
Copyright
Copyright © African Studies Association 2019

In Energy Politics and Rural Development in Sub-Saharan Africa: The Case of Ghana, Naaborle Sackeyfio investigates why Ghana, a country with such vast access to hydropower and a rapidly growing economy, has produced such uneven electricity development. While Ghana boasts an official electrification rate of 80.5 percent, second only to South Africa on the continent, access is unreliable and irregular for many Ghanaians, particularly in the rural areas. This book offers a thorough institutional analysis of the Ghanaian political economy over the past several decades to provide an explanation for this puzzle.

Ghana is frequently hailed as a tremendous success story of democratization and economic recovery, but Sackeyfio offers a more nuanced and critical account of this case. The book also furthers the theoretical debate on the politics of the rural-urban divide in one of the most important and rapidly transforming sectors of the economy, electricity provision. The original empirical analysis offers many insights for other newly democratic developing countries struggling with the simultaneous challenges to democratize, decentralize, and adopt neoliberal reforms purportedly designed to increase the efficiency of public service delivery to their constituents. Sackeyfio makes an important contribution by highlighting the deeply political calculations involved in the provision of electricity over time.

The research design for the book focuses primarily on Ghana as a case study, with very brief comparative case analyses of Nigeria and South Africa. For her evidence, the author synthesizes a great many secondary sources on Ghanaian politics and energy policy in Africa. She also draws on original fieldwork over a period of twenty-four months between 2007 and 2009, when she conducted twenty-three in-depth interviews with Ghanaian politicians and civil servants involved in the energy sector as well as analyzing archival records, parliamentary debates, and contemporary newspapers. Sackeyfio also provides valuable contextual analysis of the political economy in Ghana by comparing Afrobarometer public opinion data from Ghanaians to aggregate results from other African countries.

The book is organized in five empirical chapters with an additional introduction and conclusion. Each of the chapters has a unique focus and relates to the others, but the book chapters can be read separately and do not build as a tightly woven narrative. In Chapter Two, Sackeyfio lays out the theoretical framework for how institutional reforms undertaken as part of a decentralization initiative beginning in the late 1980s have produced suboptimal outcomes for rural electrification. In Chapter Three, she reviews the institutional reforms in the power sector that were advocated by the World Bank and other donors but only partially implemented by the government of Ghana from the early 1990s. In Chapter Four, Sackeyfio reviews the politics of the rural development focus and emphasis on rural electrification, particularly under Rawlings. In Chapter Five, she unpacks the politics of electricity access data and uncovers regional inequalities that correlate with electoral “swing” regions.

One of the central findings of the book is that electricity provision is characterized by differential access across the ten administrative regions of Ghana as well as by disparities of access within the regions. Sackeyfio presents statistical analysis that suggests that the highest rates of electricity access between the 2000 and 2008 elections are the regions with the highest proportion of swing voters. This work raises important conceptual issues about what constitutes electricity access and how politics shapes the way that needs are interpreted and service delivery is measured and represented to the public.

Sackeyfio thus provides compelling evidence that electricity is not a technical problem, but rather a highly politicized good in many developing countries such as Ghana. Over the book’s empirical chapters, Sackeyfio builds a complex argument about how the push for neoliberal reforms in the power sector has intersected with democratization and decentralization. She concludes that the implementation of only a partial set of reforms is not only politically necessary for regime survival, but it is normatively preferable in terms of equitable outcomes, particular for the rural poor.

In the end, one of Sackeyfio’s most powerful contentions is that electricity should be considered a public good, not a private one. She concludes that the donors and international financial institutions should not treat electricity as a private sector, market-based transaction but rather support developing country governments to promote the “electricity social compact” that has become such a widespread expectation among citizens in Ghana.

This book highlights the centrality of politics for a sector of public service delivery that is usually the exclusive domain of engineers and economists. While not the main focus of the study, her work raises interesting questions for the future as Ghana continues to struggle with climate change and the low water levels in its hydroelectric dams. How will future governments reconcile the tensions between rapidly expanding access, reliability, and affordability to rural areas with the push to adopt renewable energy technologies? Renewable energy technologies are also likely to disrupt conventional patron-client relations and the existing systems of cooptation of rural voters.

In sum, this book provides an insightful analysis for scholars and graduate students in political science, development economics, geography, engineering, and policy. It is also recommended for development practitioners and donors as they consider whether and how to advocate for increased private sector participation in the power sector across many developing countries.