Home
The Work of Politics

The Work of Politics 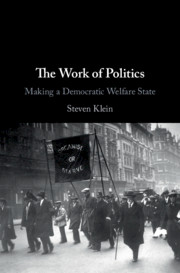 The Work of Politics advances a new understanding of how democratic social movements work with welfare institutions to challenge structures of domination. Klein develops a novel theory that depicts welfare institutions as “worldly mediators,” or sites of democratic world-making fostering political empowerment and participation within the context of capitalist economic forces. Drawing on the writings of Weber, Arendt, and Habermas, and historical episodes that range from the workers' movement in Bismarck's Germany to post-war Swedish feminism, this book challenges us to rethink the distribution of power in society, as well as the fundamental concerns of democratic theory. Ranging across political theory and intellectual history, The Work of Politics provides a vital contribution to contemporary thinking about the future of the welfare state.

‘The welfare state is a site of intense democracy, where workers, women, people of color, and immigrants take radical action on their own behalf. In a fascinating reconstruction of more than a century's thinking – from Weber to Habermas and beyond – Klein gives us not only the most discerning and robust theory of the welfare state to date, but a way to think past the welfare state, to show us what democratic agency in a 21st century political economy might be.'

‘Democratic theory meets political economy in this wonderful book. Struggles over health insurance, unemployment support, job guarantees, and minimum income can be radically transformative of social and political relations. Rich in history, theory, and fact, this book offers an exciting new take on the welfare state and its democratic potential.'

‘Steven Klein's new book is a masterpiece in the field of critical democratic theory of welfare institutions. In this theoretically rich and historically informed book, Klein encourages emancipatory social movements to recognize how social welfare concerns can become the crucial occasion for broader forms of democratic action and state reform. An impressive work that will find its audience.'

‘This book is political theory at its very best: erudite, illuminating, and relevant.'

‘Articulating a combative programme for the democratization of the economy, this book renders radical politics both more pervasive and more plausible. Rich in pertinent historical detail and ambitious theoretical insight, it dispels many of the misperceptions that encumber our political imagination, paving the path for transformative democratic politics (or for emancipatory solidarity) that we now need as a matter of urgency.'

‘With a deft mix of political history and the history of political thought, Steven Klein illuminates how welfare institutions have been and could still be sites for ongoing democratic engagement. His brilliant and original readings of Weber, Arendt, Heidegger, and Habermas show how the realm of bare life or necessity can, through the very ordinariness and pervasiveness of its connections to people's lives, be a place where collectives coalesce to struggle over and for the good life. And most impressively, he shows that this remains true even when that realm is thoroughly bureaucratized.'