Home
Sharks upon the Land

Sharks upon the Land 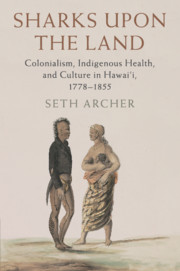 Historian Seth Archer traces the cultural impact of disease and health problems in the Hawaiian Islands from the arrival of Europeans to 1855. Colonialism in Hawaiʻi began with epidemiological incursions, and Archer argues that health remained the national crisis of the islands for more than a century. Introduced diseases resulted in reduced life spans, rising infertility and infant mortality, and persistent poor health for generations of Islanders, leaving a deep imprint on Hawaiian culture and national consciousness. Scholars have noted the role of epidemics in the depopulation of Hawaiʻi and broader Oceania, yet few have considered the interplay between colonialism, health, and culture - including Native religion, medicine, and gender. This study emphasizes Islanders' own ideas about, and responses to, health challenges on the local level. Ultimately, Hawaiʻi provides a case study for health and culture change among Indigenous populations across the Americas and the Pacific.

'Seth Archer has written a path-breaking book about how ma‘i malihini - diseases introduced by foreigners - repeatedly devastated the indigenous peoples of Hawai‘i. Just as important, he has provided a compelling narrative revealing that despite the horrors of frequent epidemics Native Hawaiians did not disappear but instead carved out their own future. Sharks upon the Land is a must-read for those who want to understand the meaning and costs of European expansion.'

'With a masterful command of both history and epidemiology, Seth Archer convincingly shows how a national health crisis, driven initially by syphilis, gonorrhea, and tuberculosis, affected every realm of Hawaiian society, from religion to politics to labor. Sharks upon the Land is not only an innovative history of Hawai‘i. It is a clarion call to recognize one of the most important and overlooked consequences of colonialism: the devastating and multigenerational impact on human health.'

Claudio Saunt - author of West of the Revolution: An Uncommon History of 1776

'Sharks upon the Land is a readable, unflinching account of the ways disease and poor health drove Hawaiians to alter their lives. Eloquent, forthright, and utterly convincing, this book sets a new standard for future scholars.'

'More than just addressing the important role that diseases played in the colonization of Hawai‘i, Archer’s impressive use of Hawaiian-language sources and the archival record uncovers a compelling narrative about Islanders’ cultural responses to catastrophic health challenges during the first century of encounters with those beyond their shores.'

Joshua L. Reid - author of The Sea Is My Country: The Maritime World of the Makahs

'In this crisply written and compact book, Archer blends epidemiological, political, social, religious, and gender perspectives to paint the most convincing picture yet of the grim health experience of Hawaiians in the generations following the arrival of Captain Cook, his crew, and their microbes. An important contribution to Pacific, imperial, and health history.'

'Sharks upon the Land offers important insights into continuing controversies about virgin-soil epidemics … Archer’s work is a major contribution to historians’ ongoing efforts to understand what happened and why.'