Musical Authorship from Schütz to Bach 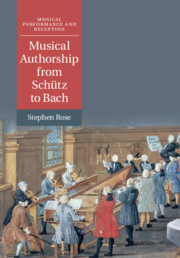 What did the term 'author' denote for Lutheran musicians in the generations between Heinrich Schütz and Johann Sebastian Bach? As part of the Musical Performance and Reception series, this book examines attitudes to authorship as revealed in the production, performance and reception of music in seventeenth-century German lands. Analysing a wide array of archival, musical, philosophical and theological texts, this study illuminates notions of creativity in the period and the ways in which individuality was projected and detected in printed and manuscript music. Its investigation of musical ownership and regulation shows how composers appealed to princely authority to protect their publications, and how town councils sought to control the compositional efforts of their church musicians. Interpreting authorship as a dialogue between authority and individuality, this book uses an interdisciplinary approach to explore changing attitudes to the self in the era between Schütz and Bach.

‘The writing is clear, the scholarship impeccable. This is a valuable addition to the historical musicology literature.’

‘Rose is on familiar ground here given his prior distinguished work in the field, and he navigates it with great aplomb. He is particularly strong on how composers sought to control the market for their wares by way of printing and publishing.’

‘Rose provides both an investigation of authorship in the period and-even more usefully-an innovative and fruitful starting point for understanding the musical culture of the time … the book is invaluable in deepening our understanding of seventeenth-century creativity.’

‘Stephen Rose’s important new book on musical authorship in the seventeenth and eighteenth centuries answers a lot of questions scholars of Baroque music often struggle with but rarely get around to researching in depth … Stephen Rose’s book will be a standard text for everybody interested in the cultural context of German music in the seventeenth and eighteenth centuries. It should inspire new ways of thinking about creativity in the early modern period and, the final chapter especially, will challenge established notions of historically informed performance practice.’

‘Throughout the book, the reader feels in very safe hands. Its contents are highly informative, refreshingly jargon-free, and beautifully produced. Rose’s own assured authorial voice,his expert handling of original texts and their translation, his solid methodological principles and lucid writing style render his book nothing less than a model for the kind of historical work it presents. Its wealth of historical materials can serve as a stimulus, moreover, for future scholarly endeavours pursuing the numerous promising avenues of enquiry opened up here.'