America and Europe in the 21st Century 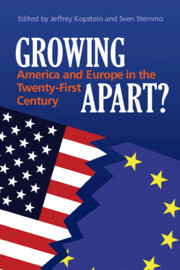 Many thought the 21st century would witness political, economic and even ideological convergence amongst the countries of the West. This has not happened. Today we see America 'growing apart' from her democratic allies and neighbors. Growing Apart shows how the social, political, and economic forces shaping advanced democratic states are pushing America in different directions from the rest of the democratic world and argues that these changes are not the product of any particular president or government. This volume brings together a set of leading scholars who each examine the evolution of different social, political, and economic forces shaping Europe and America. It is the first book to unite the international relations scholarship on transatlantic relations with the comparative politics literature on the varieties of capitalism. Taken together, the essays in this volume address whether the 'West' will continue to remain a coherent entity in the 21st century.

"The question of whether the United States and Europe will or even should remain closely allied is a critical and much debated one. Bringing together some of the most impressive scholars on both sides of the Atlantic, this book grapples with this question from a wide range of angles. It will be a ‘must-read’ for all concerned with U.S.-European relations, the ‘future of the West,’ and the way in which international and domestic factors interact to produce policy outcomes."
Sheri Berman, Barnard College

"Whether the West maintains its cohesion in the face of growing differences across the Atlantic is one of the most important and interesting questions in world affairs. The contributors to this volume provide outstanding analyses of a range of political, economic and cultural issues that make this book invaluable to anyone concerned about the future of Transatlantic relations."
James Goldgeier, George Washington University

"A thorough, thoughtful and provocative treatment. The topic selection is excellent, and a number of essays are superb, especially those of Cohrane et al., Cohen-Tangui, and Drezner. Readers may – and even should – disagree with some of the assessments, but this is likely to become a widely-cited account of European-American relations at the present time."
Robert J. Lieber, Georgetown University

"Tocqueville was convinced that nineteenth-century America was the mirror where old societies of Europe could contemplate their inexorable fate. Kopstein and Steinmo by contrast wonder if Europe and America are not growing apart. They do not provide a clear-cut answer to the question, but offer us a rich analysis of the trends which sometimes work in a rather complex and contradictory way. The aphorism according to which ‘Britain and America are two peoples divided by the same language’ might work for Europe and the US as well. They use the same semantics: liberalism, democracy, fundamental rights – but give them contrasting interpretations. Here is the paradox: Divorce is impossible but living together is not easy. Thanks to Kopstein, Steinmo, and their collaborators, we get a better and updated understanding of this unhappy couple."
Yves Mény, President, European University Institute

"Several important theories in the social science have for long predicted that countries that share the same basic economic organizing principles would converge in their politics and social organization. This volume shows that at least in one very important respect, this is not the case. On the contrary, there is an increasing variation in political behavior, social outcomes, and ideological beliefs among the industrialized capitalist market dominated countries. Both the political elite and ‘people in general’ in Western Europe and the United States respectively have increasingly divergent ideas about what type of society they want to build. In an elegant and sophisticated way, this volume addresses head on this puzzle of why ‘the west’ is growing apart. It contains several surprising and counterintuitive findings and ideas and deserves a wide audience."
Bo Rothstein, August Röhss Chair in Political Science at Göteborg University