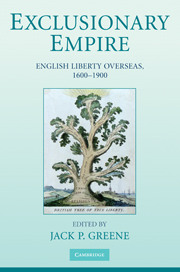 Consisting of an introduction and ten chapters, Exclusionary Empire examines the transfer of English traditions of liberty and the rule of law overseas from 1600 to 1900. Each chapter is written by a noted specialist and focuses on a particular area of the settler empire – Colonial North America, the West Indies, Ireland, the early United States, Canada, Australia, New Zealand, and South Africa – and on one non-settler colony, India. The book examines the ways in which the polities in each of these areas incorporated these traditions, paying particular attention to the extent to which these traditions were confined to the independent white male segments of society and denied to most others. This collection will be invaluable to all those interested in the history of colonialism, European expansion, the development of empire, the role of cultural inheritance in those histories, and the confinement of access to that inheritance to people of European descent.

'Britain’s empire was the first since antiquity expressly dedicated to the encouragement of liberty. Exclusionary Empire comprehensively maps the contrasting, varied, and often paradoxical results of Britons’ efforts to export and foster their freedoms around the world. This impressive array of authoritative essays provides a new history of the British Empire seen through its liberal institutions and a novel account of liberty’s complex imperialitineraries.'

'The spread of English liberal traditions overseas has long been a central theme in British Imperial history but this is the first book to examine the subject in detail from a comparative perspective. The specialist authors of the various case studies are sensitive to the fact that the extension of liberal traditions to overseas Britons frequently meant the denial of liberty to subordinated peoples throughout the Empire. The result is a volume of wide-ranging, stimulating and nuanced essays that should be required reading for students and scholars interested in the spread of British constitutional ideas across the globe.'

'When the English moved overseas, they expected to take with them their proudest possession - their passionate devotion to liberty. This collection of ten bold, brilliant and often breathtakingly insightful essays on English liberty overseas ranges from colonial North America and the West Indies, to India, and to the white dominion colonies of South Africa and the Antipodes. They help us understand why white settlers were so attached to freedom for themselves and so opposed to freedom for others. Exclusionary Empire, edited by Jack P. Greene, the world's leading historian of politics and identity in the British Empire, is a landmark work in imperial history. In its cosmopolitan and expansive vision of imperial history, it shows us all how exciting, and how relevant, imperial history, done in a non-parochial way, can be. It deserves an extremely wide readership.'

'This extraordinary volume strides across the globe to track the shifting meanings of ‘liberty’ over four centuries of colonization. Its incisive case studies of North America, the West Indies, Ireland, Canada, India, Australia, and New Zealand show how the extension of British liberty was far from a simple or benign bequest to the world. Exported abroad, political liberalism triggered revolutionary ruptures and rationalized new modes of subjugation. Taken together, these essays imagine a British world defined by the unexpected legal, political, and ideological consequences of colonial settlement.'

'The essays in this excellent book show how British communities overseas formulated claims to the liberty to which the British at home were deemed to be entitled and how they extracted recognition of their rights from metropolitan authority by means varying from armed rebellion to persuasion. 'Free' British societies were created throughout the world, free that is, for people of British origin. The extent to which liberty might be extended to non-British people, especially to conquered indigenous populations, was quite another matter. The obverse of British freedom often turned out to be the subjection of others. This complex theme is explored in a series of powerful studies which deal with a wide variety of colonial societies over a long period of time.'

'Exclusion and empire have always been uneasy yet inseparable companions, and the transference overseas of ‘English liberties’ a persistent leit-motif in the history of British colonial expansion. Shared identity in this world was explicitly exclusive. Against a background of revived interest in white settlement and the ‘British world’, this valuable collection draws attention to the repressiveness of transferred liberties – self-government, property rights, and the rule of law – as claimed and monopolised by white settlers. Drawing on older traditions of commonwealth history, it also highlights the importance of viewing comparatively the illiberal trajectories of different colonial territories.'