The First World War, the Easter Rising and the Irish Revolution 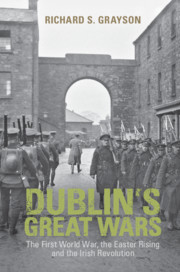 For the first time, Richard S. Grayson tells the story of the Dubliners who served in the British military and in republican forces during the First World War and the Irish Revolution as a series of interconnected 'Great Wars'. He charts the full scope of Dubliners' military service, far beyond the well-known Dublin 'Pals', with as many as 35,000 serving and over 6,500 dead, from the Irish Sea to the Middle East and beyond. Linking two conflicts usually narrated as separate stories, he shows how Irish nationalist support for Britain going to war in 1914 can only be understood in the context of the political fight for Home Rule and why so many Dubliners were hostile to the Easter Rising. He examines Dublin loyalism and how the War of Independence and the Civil War would be shaped by the militarisation of Irish society and the earlier experiences of veterans of the British army.

‘Dublin's Great Wars exploits a wealth of sources to reconstruct the street-level impact of a decade of war and revolution which ultimately culminated in Irish independence. Ranging from Gallipoli to the General Post Office, Grayson skilfully illuminates the diversity of experiences and loyalties that characterised revolutionary Dublin's entangled military histories.'

'Richard S. Grayson's masterly study shows that Dubliners' opposition to rule by the British ran deep – but so did support for the Crown. This is a penetrating and ambitious book that successfully reconnects the Irish Revolution with the First World War.'

‘This lively and detailed account of the military history of Dublin men and their families from 1912 to 1923 presents a convincing case for viewing the Great War and the military episodes in the Irish struggle for independence as a series of inter-connected ‘Great Wars'.'

‘This is an important and timely book, given its publication during the centenary of the Irish Revolution. Meticulously researched, in archives in Britain and Ireland, it neatly contextualises Dublin's experience of revolution within the experience of the greater World War of 1914–18,'

‘A powerful, multivocal account of a decade of violence in Ireland beginning in 1914…. This is a book of sensitive scholarship, one based on a deep knowledge of both the military history and the social history of the men who waged it … it is the best history we have of Dubliners at war, and, like James Joyce's ‘The Dead', published in 1914, it treats them with the sympathy and compassion they deserve.'

‘Written in a clear and lively style and resting upon very substantial research … an excellent and illuminating account of how conflict shaped Ireland's capital city during the Irish revolution and is bound to command the wide audience it deserves.'

‘A very significant addition to our knowledge and understanding of the Irish revolution and should be read by everyone wishing to understand it more fully.'

‘His Easter Week chapters entwine the Royal Dublin Fusiliers' fighting at Hulluch in Belgium with the simultaneous uprising in Dublin.… Grayson's eye for detail lends these passages a cinematic flair, capturing the prayers of both Irish troops abroad and rebels back home as they prepared to go into their respective battles.'