Home
Democracy and Economic Openness in an Interconnected System

Democracy and Economic Openness in an Interconnected System 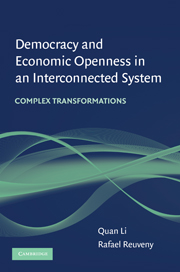 In this book, Quan Li and Rafael Reuveny combine the social scientific approach with a broad, interdisciplinary scope to address some of the most intriguing and important political, economic, and environmental issues of our times. Their book employs formal and statistical methods to study the interactions of economic globalization, democratic governance, income inequality, economic development, military violence, and environmental degradation. In doing so, Li and Reuveny cross multiple disciplinary boundaries, engage various academic debates, bring the insights from compartmentalized bodies of literature into direct dialogue, and uncover policy tradeoffs in a growingly interconnected political-economic-environmental system. They show that growing interconnectedness in the global system increases the demands on national leaders and their advisors; academicians and policy makers will need to cross disciplinary boundaries if they seek to better understand and address the policy tradeoffs of even more complex processes than the ones investigated here.

'Democracy and Economic Openness in an Interconnected System represents a brilliant attempt to tackle some of the world’s most fundamental issues with academic candor, statistical eloquence, and policy insights, heightening the awareness of human promises, limitations, and opportunities as well as contributing to an ever-enriching research platform that cuts across disciplines and fields. It is an important book to read and share.'

'Motivated by important theoretical debates, systematic in the way it analyzes complex combinations of causal relationships, and sophisticated in the panel regression methods and formal theoretic reasoning it applies, Democracy and Economic Openness in an Interconnected System is a major contribution to political economy. The book is a must-read for scholars, international policy makers, and global activists.'

'This ambitious political economy volume opens our eyes to the complex, interactive, and frequently unexpected effects that democracy and economic openness have on development, income inequality, environmental degradation, and military conflict. As expected, trade openness and democracy reduce income inequality. Yet FDI increases income disparity. Again, as expected, democracy reduces military conflict, but concurrently military conflict reduces democracy. Once more, consistent with prior expectations, environmental pollution declines with democracy and economic openness but deforestation rises. These are only examples of many tantalizing empirical results that emerge from the general theoretical structure developed explicitly in the book. For the first time a comprehensive political economy model incorporates explicitly economic degradation and demonstrates how economic, political, and military actions affect our future. This is a must-read book for any serious student of political economy. Bravo!'

'A superb example of careful theory development and sophisticated empirical testing. Increasingly we are confronted with the problem of accurately specifying relationships within a complex matrix of interrelated variables. Li and Reuveny have analytically resolved this problem in convincing fashion. Not only are the concepts of democracy, economic development, environmental degradation, military conflict, and globalization of supreme importance, but they are juxtaposed here in novel ways yielding equally novel insights. I heartily recommend this book to any and all who have an interest in these critical areas of inquiry.'

'Methodologically, this book rigorously employs a quantitative approach, and thus tests hypotheses with the use of statistics and large-n real world data analysis … This book is a theoretically grounded, interdisciplinary-oriented and methodologically  rigorous investigation of arguably the most important problem in the social sciences today. The complex and often misunderstood relationship between globalisation and democracy … Utlimately, Democracy and Economic Openness is essential reading for social scientists and policy makers interested in addressing the world's most important issues, such as globalistation, democracy, interstate conflict and environmental degradation.'