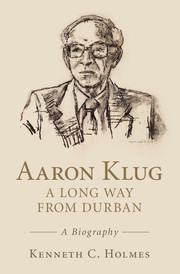 The atomic structures of macromolecules provide the key to understanding how life works. Aaron Klug led the way in the development of methods for solving such structures and is one of the pioneers of structural molecular biology. He was awarded a Nobel Prize in 1982 for his work. Illuminating both his personal life and scientific achievements, this unique biography begins with Klug's youth in Durban and his studies at Johannesburg, Cape Town and then Trinity College, Cambridge. Holmes proceeds to explore Klug's career from his work on the structure of viruses with Rosalind Franklin at Birkbeck College, London to his time as Director of the MRC Laboratory of Molecular Biology (LMB) in Cambridge and as President of the Royal Society. Drawing on their long-term collaboration, interviews and unique access to Klug's archives, Holmes provides a fascinating account of an innovative man and his place in the history of structural molecular biology.

'This biography highlights both the sense in which Klug was self-made and driven, and the importance of his collaborations, mentors, peers and his own students in shaping the man he became and his intellectual achievements. The biography also offers a fascinating insight into macromolecular scientific discovery while keeping a very human touch throughout. A fitting tribute to a great scientist and role model.'

'Kenneth C. Holmes’ lively biography of Aaron Klug narrates the fascinating story of a man who had a central role in the transformation of modern biology into a molecular science. Holmes embeds Klug's scientific innovations in the wider context of mid-to-late twentieth-century intellectual and social history; his descriptions of the left-wing Zionism of Klug's youth in South Africa and of the machinations of reactionary dons in Peterhouse, Cambridge, have the same absorbing clarity as his explanations of how Klug and his co-workers created a science of quantitative image analysis in electron microscopy. At once a vade mecum to structural biology and a document of the postwar academic scene in Britain, this book is also quite simply a very good read.'

'Holmes has created a portrait of Aaron Klug as a gentle and likeable man whose achievements can only be explained by his great intellect, enormous curiosity and work ethic. In this excellent biography Klug’s youth and years as a young academic are presented within the socio-political context of the time, but the main thrust of the text is Klug’s pursuance of scientific enquiry. Holmes succeeds brilliantly in providing insight into Klug’s creative genius. This book throws light on the long and dedicated process followed by scientists as they strive to add to knowledge. It is essential reading for anyone interested in science.'

'In this biography of the great scientist Sir Aaron Klug the eminent scientist Dr. Kenneth C. Holmes skilfully braids Klug's extraordinary intellectual journey, with his personal Odyssey from Durban South Africa to Cambridge. Holmes has written a lucid, accessible book. In telling Klug's story Holmes also tells the story of the extraordinary scientific enterprise of the past half century which discovered the fundamental structures of cells genomes and viruses. The book is fascinating and reads like a complex novel replete with heroes, unforgettable characters and a complex plot line. Best of all - it's all true.'

'Aaron Klug is my scientific father. He introduced me to how I should think and work as a scientist. He taught me how I should conduct my own research. Kenneth C. Holmes’ book brings back all my lovely memories of Aaron and provides an insight into how a great scientist works.'

'Aaron Klug is one of the towering figures of modern structural biology who made contributions to major areas such as virus structure, chromatin organization and laid the foundations of how electron microscopy can be used to determine the structures of large molecules. At the same time, he was also a conscientious citizen who provided leadership to both the UK and Israeli science communities. Kenneth C. Holmes is one of the most knowledgeable people to write this book, and in this tour de force, he describes Aaron's journey from his birth in Lithuania, childhood and schooling in South Africa to his lifelong career in Cambridge. What emerges is a complete picture of what it was like to be a pioneer in postwar molecular biology.'

'This wonderfully readable biography of Aaron Klug interweaves the life of a giant in science with the history of a new discipline, structural molecular biology. Written by someone whose career spanned both worlds, we learn the story of Aaron’s precocious talent which first came to light in South Africa, scholastic achievements that led to Cambridge and the world of scientific pioneers, and exceptionalism which resulted in the Nobel Prize in 1982 and an astounding array of other outstanding contributions. Self-effacing and private, Aaron’s influence and analytical mind imbued the Presidency of the Royal Society, the Human Genome project, Ben Gurion University Israel, and the translation of fundamental discoveries into applications. For those privileged to work with him and who thought they knew him, many will find this biography richly endowed with facets of which we knew little. Yes, we knew he was a polymath with a phenomenal memory but who knew that he wished he had studied the history of Rome!'

'A brilliant account of a brilliant scientist working worldwide, both provincial and national. … The impressive life of a migrating distinguished South African scientist. … Excellent. A South African physicist climbs to the very top worldwide.'

'This is a remarkable biography because of the exceptional qualities of the person in focus, Aaron Klug, and because the author, as a witness to the events he describes, is occasionally referred to in the third person. Klug … has a talent for envisioning key unsolved problems and thereby becoming one of the founding fathers and long-time standard bearers of the field of structural biology. Many of the leading scientists in the field were trained in his laboratory. He actively brought about a major transformation of the activities at the famous Laboratory of Molecular Biology in Cambridge [and] also shouldered the Presidency of the Royal Society at times of turbulence and found ways forward. The book presents a comprehensive picture of the life of an exceptionally erudite and capable person, sometimes shy in his demeanour but aware of his mission.'

'Kenneth C. Holmes succeeds with this rich account of the life and work of one of the world’s most outstanding scientific minds, to portray the whole man. Aaron Klug leaps from the pages; brilliant, innovative, curious, original, energetic, determined, conscientious and inspirational and at the same time, modest and loving. His groundbreaking science, the one for which he received the Nobel prize as well as the trail-blazing research thereafter, benefits mankind. His devotion to Israel and immense contribution to the development of science in this small desert land, led to the creation of the National Institute for Biotechnology at Ben-Gurion University of the Negev. This Institute, that houses the Klug Integrated Center for Biomolecular Structure and Function, is a living legacy of Aaron Klug’s vision, creativity and passion for scientific excellence and the wellbeing of human kind.'

'… this book is a nice slice of scientific history (including, for a change, actual science) and a fairly comprehensive who's who of post-war British biology …'