from Part III - Spatial and Temporal Variations of the Geomagnetic Field 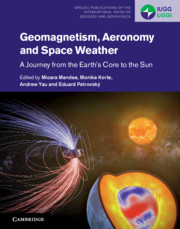