from 28 - Measuring Motivation in Educational Settings

from Part I - The Self and Its Impact 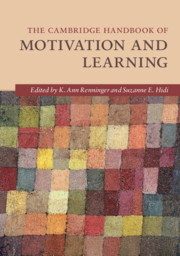