from Part I - Theoretical Perspectives

from Part I - Death, dying and the criminal law 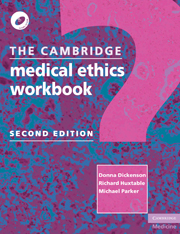