from Part III - Kant and Redemption

from Part II - Schleiermacher as Theologian 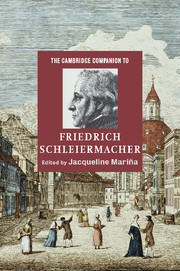