from Part II - Metaphysics and the Mind 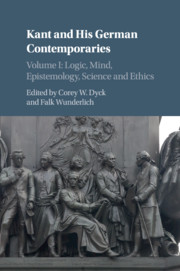 from Part I - Kant’s Ethical Thought: Sources and Stages