The de-industrializing city in the UK and Germany: conceptual approaches and empirical findings in comparative perspective 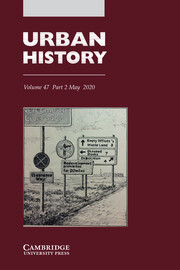