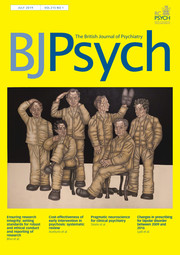 This picture is based on a photograph of ‘catatonic’ patients which appeared in the fifth edition of ‘Psychiatrie’ (1896) by Emil Kraepelin. In this picture I have tried to show that the patients were being treated as ‘exhibits’ by making the background resemble a stage, but I also wanted to emphasise the individuality of each patient. The men cannot be reduced to simple diagnostic categories, and even within an institutional setting with institutional clothes, they retain something of their selves. This image featured in an exhibition entitled ‘Falling Up’ at the Scottish Parliament in December 2018, organised by Drew Walker and which aimed to raise awareness of mental health issues and of the therapeutic artistic community at Gugging in Austria (which has featured in previous ‘Psychiatry in Pictures’). Allan Beveridge has exhibited regularly with the Society of Scottish Artists and with earlier ‘Falling Up’ exhibitions.