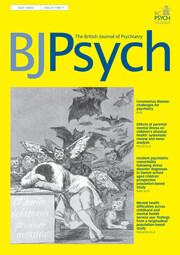 This image is in the public domain via the Metropolitan Museum of Art.

In 1792, the great Spanish painter Goya became stricken with a severe mental and physical illness, which resulted in near deafness. The nature of his condition remains a mystery, but Ménière's disease has been suggested as a possibility. Subsequently, he became withdrawn, introspective and his outlook grew bleaker. Goya spent five years recuperating, during which time he read the work of the French revolutionary philosophers. From Rousseau, he developed the idea that imagination divorced from reason produces monsters; but that in partnership with reason ‘it is the mother of the arts and the source of its wonders'. In Spain he witnessed a country that seemed to have abandoned reason, and in Los Caprichos with its cast of monsters, grotesques, devils and witches, he portrayed the resulting mayhem. Los Caprichos consists of a series of 80 acquatinted etchings, which he published in 1799. Goya had originally intended that ‘The sleep of reason’ would be the opening Plate, but changed its position to Plate 43 as he was worried about a backlash from the political and clerical authorities. The etching shows a sleeping man, usually taken as Goya, plagued by disturbing and unsettling visions.

Thank you to Allan Beveridge for providing the text.