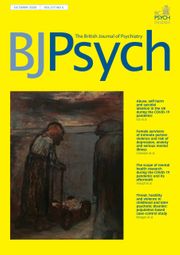 No. 1 (Two Figures) by Cynthia Pell © Bethlem Museum of the Mind.

Cynthia Pell was born in 1933 and grew up in north London. Her family were of Jewish background, and the Holocaust became one of the subjects that preoccupied her in later life. She won a national art competition in 1948 and went on to attend Bournemouth and then Camberwell Art Colleges. The only public exhibition that took place during her life time was held at the Beaux Art Gallery in London in 1957. A critic wrote that Cynthia Pell's vision of a doomed society was demonstrated by the anxiety shown in the faces of her subjects. After the exhibition, she destroyed many of her paintings in the street outside the gallery. The destruction of her work and her tendency to give it away became a pattern she would follow in later life.

During the next few years, Cynthia became increasingly depressed and lost weight. In the 1970s, she was admitted to St. Bernard's Hospital, Southall and later to Bexley Hospital, where she was befriended by the art therapist, Britta Von Zweigbergk. Pell's internal turmoil was reflected in her work, some of which show people struggling with depression. The works from this period feature self-portraits and her observations of others in the hospital. She would wander about the hospital at night, making sketches. In the words of the Bethlem Museum of Mind, ‘she became the hospital's unofficial artist-in residence’.

Information on Pell is taken from the Bethlem Museum of the Mind, Our Blog. Artist in focus – Cynthia Pell.