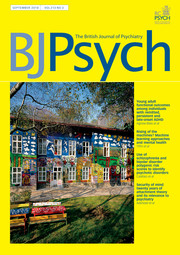 House of Artists. The painted facade of the House of Artists, nowadays part of the Art Brut Centre Gugging in Maria Gugging, Austria, is a unique artwork and historic testimony at the same time. On the former grounds of a psychiatric hospital, it emerged as a special living space for its artistically talented inhabitants, later to be well known in the art world as the group of Gugging Artists. For example artists like Johann Hauser, Oswald Tschirtner or August Walla immortalized themselves artistically through painting in bright colours on the surface of the walls of the former hospital building. Founded as the “Centre for Art and Psychotherapy“ in 1981 by the psychiatrist Leo Navratil, the institution was developed further by Navratil's successor Johann Feilacher. Feilacher initiated in 1983 the painting of the facade by the group of Gugging Artists – a powerful signal to the world outside, as well as to the inhabitants of the centre. By changing the name to the title “House of Artists“ in 1986 a new orientation for the future was given: Hierarchical structures from the former psychiatric hospital and old labels like “patient“ were erased. Today, 13 persons are living in the House of Artists and its murals are still an artwork in progress – the painting continues. For further information please visit: www.gugging.org. Creditline: East facade House of Artists, Maria Gugging, Photograph: Johann Feilacher.

From the Editor's Desk