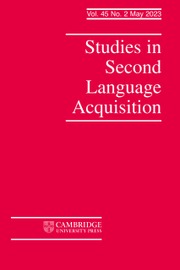 This volume is a festschrift in honor of Hugo Baetens Beardsmore on the occasion of his sixtieth birthday and the twentieth anniversary of the publication of his book Bilingualism: Basic principles (1982). The volume includes 12 articles in addition to an introduction and a laudatio. The volume reflects the important developments of studies in bilingualism in the last 20 years and covers a great variety of areas related to the sociolinguistic, educational, and psycholinguistic dimensions of bilingualism. The first chapter is a reprint of one of Baetens Beardsmore's lesser known publications (1988) and discusses the fears of bilingualism at different levels. Fifteen years later, this chapter still addresses the most important issues related to bilingualism often discussed by teachers, parents, and policy makers. The next three chapters focus on the social aspects of bilingualism: Edwards discusses bilingualism and identity in chapter 2, Clyne addresses the role of intrinsic motivation and metalinguistic awareness in bilingualism in chapter 3, and Cummins examines the differences between the criticism against bilingual education in the American press and the positive results of research on the outcomes of bilingualism in chapter 4. These three chapters each have a different focus but taken together provide an interesting perspective of the social factors affecting bilingualism. Chapter 5 by Martin and chapter 7 by Jones discuss multilingual education in Brunei. These two chapters describe the languages used in schools, the educational context, and the most recent changes in education in Brunei and could be of interest for educators in other bilingual contexts. Chapter 6 by Baker and chapter 8 by Wei and Milroy both discuss language and society but focus on minority languages in two completely different settings—Wales and Singapore. Both chapters discuss interesting theoretical aspects that are then applied to specific settings. Chapter 9 (Fraser Gupta) has a very weak link to the rest of the chapters in the book and analyzes seven self-study books of Malay from different periods. Chapter 10 (Lüdi) and chapter 11 (Myers-Scotton) discuss interesting theoretical aspects of codeswitching, and the last chapter (Genesee) focuses on the similarities and differences between early monolingual and bilingual acquisition. These three chapters are more research oriented than the rest of the chapters in the book, both because of their theoretical basis and the empirical data they discuss. They may also be the most interesting for researchers in SLA.