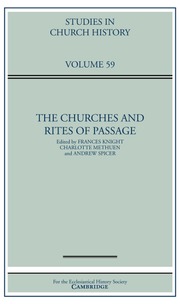 Was there a ‘the Church’ in the Middle Ages?

4 Cf. Macy, Gary, ‘Reception of the eucharist according to the theologians: a case of diversity in the 13th and 14th centuries’, in Apczynski, John, ed., Theology and the University, Proceedings of the Annual Convention of the College Theology Society, 1987 (Lanham, Maryland, 1990), pp. 15–36.Google Scholar

7 As one of several possible explanations for the real presence of Christ in the eucharist, transubstantiation argues that the substance (the unsensed essence) of the bread and wine change into the substance of the body and blood of Christ. The accidents (that which is sensed) remain unchanged. Thus transubstantiation was put forward as a way of explaining how a real change could take place without any sensed change occurring. This would make the change a metaphysical rather than a physical one. More precisely, it would be an intellectual change, since substance can only be grasped by the intellect. The belief that a true physical change took place in the eucharist was actually a heresy, that of Capharnaism. For a brief explanation of this aspect of transubstantiation, see Gary Macy, The Banquet’s Wisdom: a Short History of the Theologies of the Lord’s Supper (Mahwah, NJ, 1992), pp. 104–9.

8 Professor Langmuir, of course, describes in detail what he means by ‘religion’ and ‘religiosity’, and it is not to these precise definitions that I refer. What he fails to do is offer a convincing argument for the existence of a distinctly separate ‘papal’ or ‘Roman Catholic’ religion in the late Middle Ages. See, for instance. History, Religion, and Antisemitism, pp. 137-40, 181-2, 188-91.

Was there a ‘the Church’ in the Middle Ages?
×

Was there a ‘the Church’ in the Middle Ages?
×