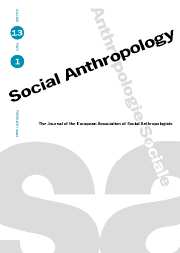 Special section: Three lectures on the future of anthropology in Europe