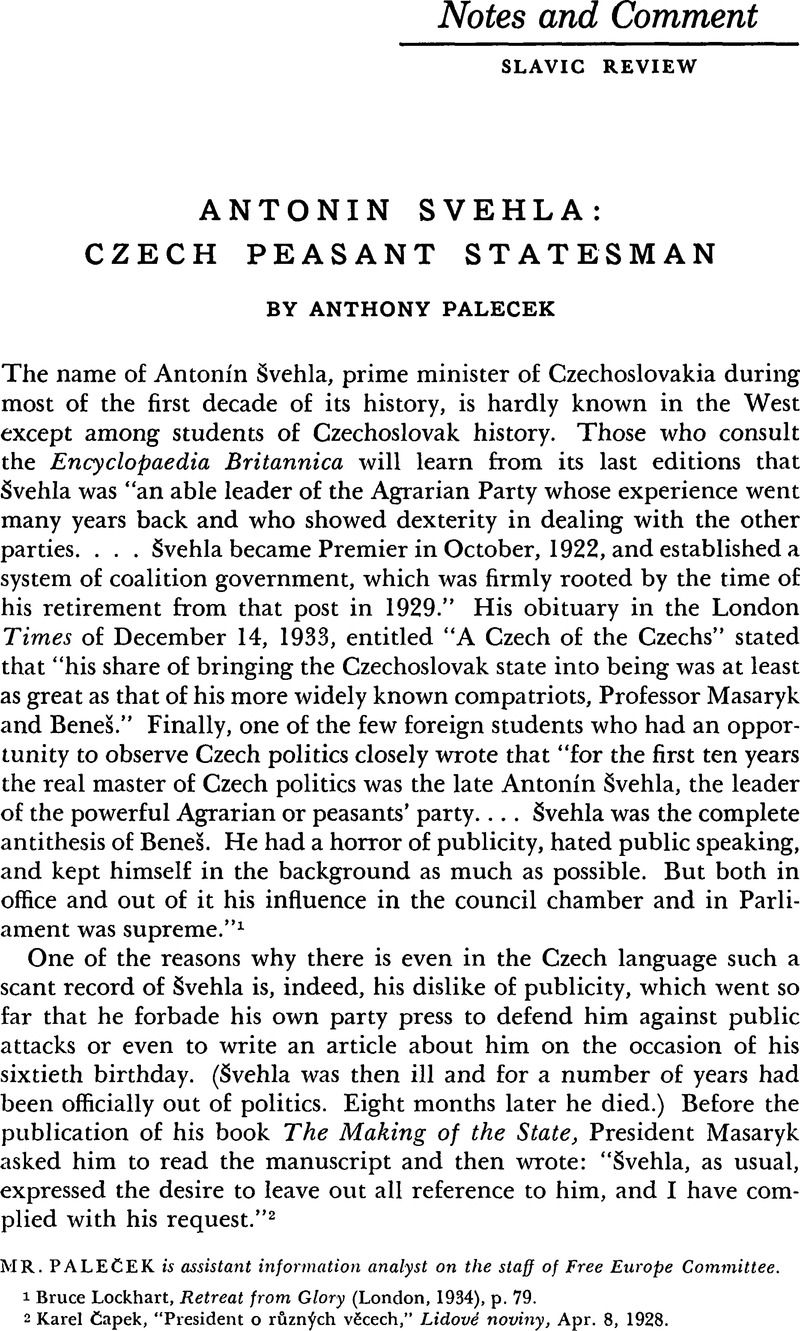 3 In Communist terms: “Boldly raising the power of the agrarian bourgeoisie by taking advantage of the contemporary social movement, he was already at that time the strongest personality of our bourgeoisie, with the nickname of the “red Agrarian.” Nejedly, Zdeněk, O lidovou republiku (Prague, 1948), II, 392-93.Google Scholar

4 “He excelled in the ability to bring different men and trends under the same roof, rather than setting them against each other in the name of some noble idea.” Peroutka, F., Budování státu (Prague, 1934), p. 1472.Google Scholar

5 “He organized things in such a way that those who had joined him were convinced of being leaders themselves rather than being led, and were pleased.” Hajšman, Jan, Mafie v rozmachu (Prague, 1933), p. 134.Google Scholar

7 “The formation of the National Committee was arranged in his office. In the same office were edited the proclamations of the Czech Parliamentary Union…. There, too, a decision was reached regarding the composition of the Revolutionary National Assembly, and he solved the difficult problem of representation of various political parties in that body.” (F. Peroutka, op. cit., p. 892). “Antonín Švehla was always the great centripetal force of the nation. All the internal forces of national concentration, national revolution and national liberation grouped round him. This mighty unifying force was active during the revolution as well as in the Republic. The chief of the general staff of the revolutionary coalition became the chief of the general staff of the republican parliamentary coalition.“ F. Soukup, 28.řijen (Prague, 1929). Soukup was a Social Democratic leader.

8 “Already in the first six months of the Republic Švehla's influence overshadowed that of Kramář, not only because his party was stronger, but on account of his superior ability.“ Peroutka, op. cit., p. 894.

9 “While the independence of Czechs and Slovaks after World War I was due first of all to Masaryk's and Beneš’ effort, the generally recognized successful consolidation of the state was primarily the work of Švehla.” (Dr. Jar. Stránský in České Slovo, Dec, 1958). Stránský was a leading National Socialist.

10 “Those who cared more for the facts of the case than for words were well aware that the leader of the so-called Red-Green coalition was Švehla....” T. G. Masaryk in Capek's article cited above.

11 The Czechoslovak constitution was drafted by a group of constitutional lawyers, supervised and directed by a parliamentary committee, headed by Svehla. Like most of the new constitutions of that time it followed mainly the French pattern, with some modifications imposed by the age of socialism and prewar experience in Austria. Thanks to Švehla, most of its provisions bearing on controversial issues became a bundle of compromises, which made it possible for him to secure its unanimous ratification. On this as well as on other occasions Švehla appeared as the only man in the country with the necessary authority, experience, and tact to bridge the gaps between conflicting ideologies and interests. After its ratification the Parliament passed a vote of thanks to the ailing Švehla. The bill introducing the constitution names him first among its authors. Peroutka, op. cit., p. 1442.

13 Though it remained the strongest party, after 1935 it could no longer be described as the dominant power. Its humiliating capitulation in the presidential elections of 1935 before a new pattern of power, which in 1945 reappeared as the ignominious Government of the National Front, and the international implications of the Henlein movement largely transferred the initiative even in internal politics from Agrarian hands into those of the new president.

14 “The presence of the German minorities in the Government coalition is mainly the result of Švehla's tact and genius for compromises.” Lockhart, op. cit., p. 79.

17 For reasons of his own Masaryk fully supported Švehla in this policy. He had a high opinion of his statesmanship, and regarded him rather than Dr. Beneš as his chosen successor (Stránský's testimony in the quoted article), but did not think much of his or perhaps of any other political party. Stormy petrel in prewar Czech politics and venerated war hero, Masaryk was twice elected before the war on his own ticket to the Reichsrat, but only with the generous support of Social Democrats. After the war he openly declared his sympathies for socialism, stating that in all countries the Left was gaining ground and that he was not shaken in that conviction by any temporary and transient swing to the Right. It seemed to him that Svehla's partiality for the Social Democrats supported that vision, which was not original. Švehla, however, had a new vision, applicable only in central and eastern Europe, and realized only in his own country. No other European thinker or statesman before him gave more than a passing thought to a common front of peasants and industrial workers, with the peasants playing the leading role, which would set up stable democratic governments, break the economic and political power of the feudal class, curb the age-old domination by the urban upper middle class, and tackle the social and moral problems created by the industrial society as courageously as the most advanced liberal regimes of the West.

18 The National Socialist (BeneS) Party after Munich by a vote of 187 against 3 of its delegates decided to join the Party of National Unity, which formed the short-lived government of the Second Republic. All the important decisions of that government were made after close consultation with the “opposition.” Testimony of Rudolf Beran, its premier, before the National Court in the spring of 1947.