Oliver O'Donovan's The Ways of Judgment 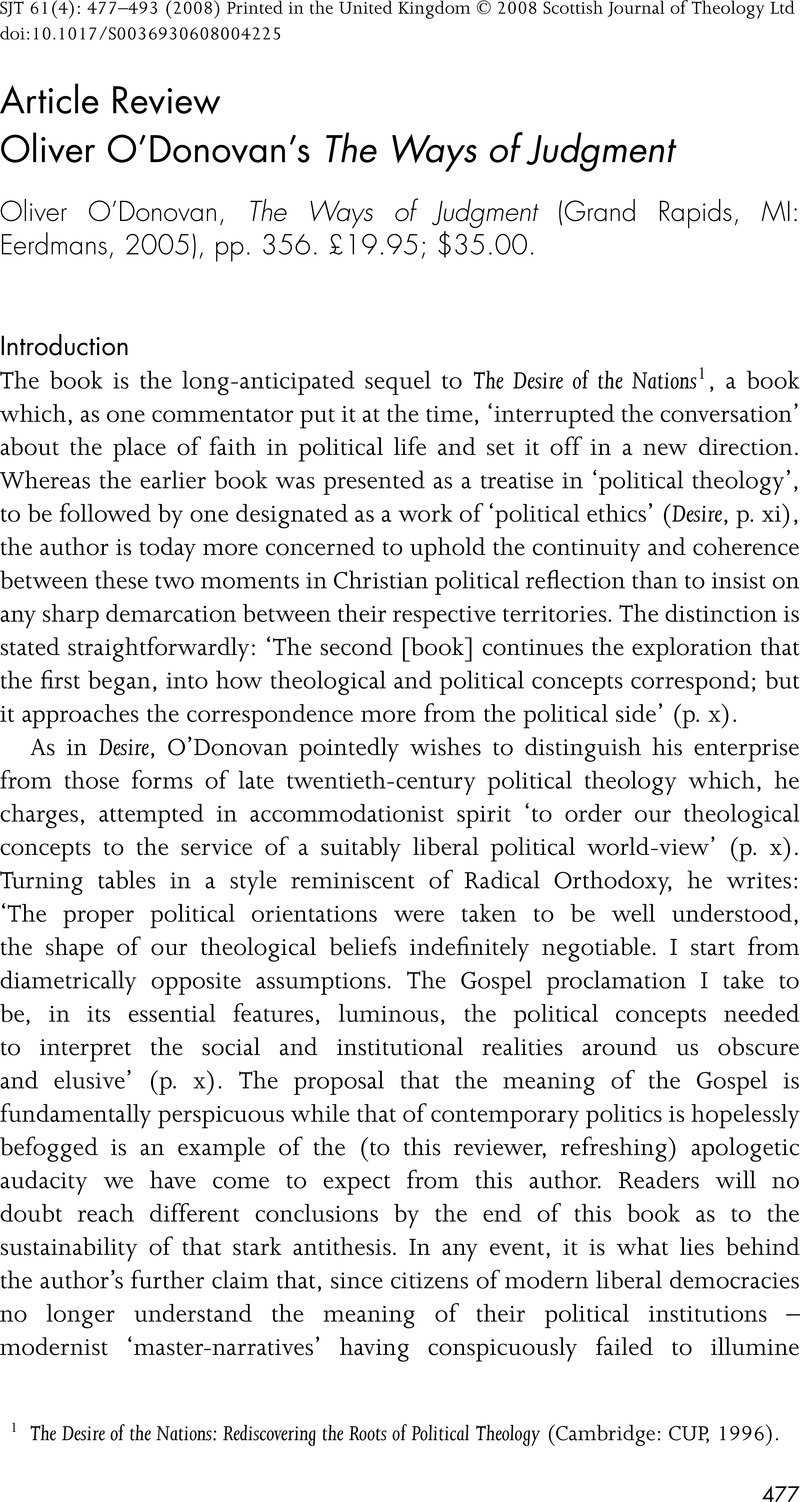 1 The Desire of the Nations: Rediscovering the Roots of Political Theology (Cambridge: CUP, 1996).

3 O'Donovan later describes such acts of judgement (somewhat confusingly) as ‘quasi-political’, pursuant to a ‘limited right of public vengeance’ accorded to the institutions performing them (p. 24). The examples of a school expelling a pupil or a business dismissing an employee are cited. These are not government institutions, though they are ‘public’ in that they contribute to the common good. And the public scope of the government's responsibility for judgement does not come to a halt at the school or factory gates. The author cites the practice of a court intervening to uphold ‘natural justice’ in such cases. These are non-government institutions whose actions are susceptible to governmental judgement insofar as they bear implications for the public realm of society.

4 See Marshall, Paul, ‘Dooyeweerd's Empirical Theory of Rights’, in McIntire, C. T. (ed.), The Legacy of Herman Dooyeweerd (Lanham, MD: University Press of America, 1985), pp. 119–42Google Scholar. The author is keen to insist on the following claim: ‘There is no distinct mode of practice with distinct principles that are neither the law of the universe nor the political principles of rendering judgment’ (p. 32). The point is framed this way as a critical response to Aristotle's notion of ‘special’ or ‘particular’ justice (Aristotle, Nicomachean Ethics 5.2) which, the author argues, mistakenly binds special justice to the abstract concept of equality (or ‘fairness’). There is no such notion of special justice. There is only either ‘general justice’ (the law of the universe), or ‘attributive justice’ (judgement) which is reserved uniquely to government. While I would not wish to rehabilitate Aristotle's notion of special justice, it does seem to me that an alternative notion (along the lines of Dooyeweerd's) is conceivable, one which names the performance of all acts of attributive justice in non-governmental spheres such as families, businesses, universities and so forth, and between individuals.

5 The author takes this to imply that ‘the rationale of political structures is not to preserve private freedoms, though they will also be preserved, but to preserve public freedoms, i.e., the free communications that we undertake simply because we are, as human beings, helplessly social’ (p. 55). But this seems too stark a contrast: I see no difficulty in supposing that part of the intentional rationale of government is to protect private freedoms, since in so doing it surely acts pursuant to its wider responsibility of protecting from external threat that sphere of ‘natural right’ properly attributed to individual persons.

6 O'Donovan terms this an ‘administrative’ conception of government (p. 60), which I think does not quite do justice to its normative richness. He later attributes to political authority (following Aristotle) the good of ‘serving the perfection of our social selves’, a formulation which sounds very like naturalism. Yet the key difference between political and other forms of social authority turns out, in a way unfamiliar to naturalism, to be eschatological: attributing political authority to providence is to see it ‘as securing the social world in the face of disintegration and preparing it for its goal in redemption . . . [I]t is the summons to the perfection of the kingdom of God that makes the crucial difference’ (p. 134).

7 This can be affirmed without giving any succour to the modern contractarianism which rightly comes under O'Donovan's severe critique; or, indeed, to contractarianism's preoccupation with what he calls ‘the moment of political “foundation”’, and which, he rightly notes, ‘arises only in the pathological, not in the normal case’. Such a moment is ‘a kind of midwifery, attending on events as providence directs them’ (p. 135) – a spiritual posture which, I think, is also quite compatible with naturalism.

9 The author shows that there are many other ways, beyond the tempering of judgement, in which society and government can be and have been informed by the church's evangelical witness. Ch. 15 elaborates several of far-reaching importance, thereby extending the discussion of ‘the redemption of society’ set forth in Desire, ch. 7.

11 ‘Every change in the law aims to squeeze out, as it were, the maximum yield of public truthfulness available within the practical constraints of the times. Sometimes it does this by attempting more, sometimes by attempting less’ (p. 193). We might note that, if the recently recharged debate about issues such as the legal regulation of same-sex relationships could be framed in this way – as the discerning of how law should ‘tell the truth’ about our own society's behavioural capacities and fragilities – it might generate more light and less heat; and so, perhaps, deliver better judgements.

12 Thus, political authority is ‘an epiphenomenon, not a phenomenon, of society’ (p. 134).

13 I think we should also say here that not every wrong that needs righting should be righted by government. I am not sure whether O'Donovan actually intends to say this. But it does seem to follow from his recognition that other social authorities properly possess the competence to govern their own internal spheres. If so, then they also properly possess the competence to correct wrongs internal to those same spheres (i.e. those which do not harm the public realm and so do not invite the attention of government).

15 In his discussion of ‘freedom’ in ch. 5, the author ventures that ‘late-modern liberalism’ has diverged radically from its (Christianly formed) classical liberal roots because of its abandonment of a transcendent reference point for ‘conscience’ and its embrace of ‘pluralism’. In so doing it has drifted ideologically towards a totalitarian view of its project (p. 75): ‘A polytheistic society negotiates multiple claims with no cohesion but what it can impose on them, so that, in effect, it enforces its own sovereignty’ (p. 76).

16 Thus, e.g.: ‘Markets do not regulate themselves. They adjust themselves, but like the brutish and short-sighted Leviathans they are, they trample people beneath their feet while they do so. It is not believable that government disinvolvement and absence of control could ever foster economic justice’ (p. 65).

17 Here the author enters the controversial thesis that ‘the only fundamental and inalienable human right that can be thought of . . . [is] the right of society as such, the right of each member to be social’ (p. 139).

18 The notion is treated further in chs. 9, 10, 12 and 14. A crucial point is that ‘traditions’ are not something over against ‘right’ but defined as ‘traditions of right’ (p. 144). For an analysis of the related concept of ‘nation’, see Joan Lockwood O'Donovan, ‘Nation, State and Civil Society in the Western Biblical Tradition’, in O'Donovan, Oliver and O'Donovan, Joan Lockwood, Bonds of Imperfection: Christian Politics Past and Present (Grand Rapids, MI: Eerdmans, 2004), pp. 276–95Google Scholar.

20 See further, Oliver O'Donovan, ‘The Justice of Assignment and Subjective Rights in Grotius’, in O'Donovan and Lockwood O'Donovan, Bonds of Imperfection, pp. 167–203.

21 One of the original features of the theory of punishment in ch. 7 is its characterisation of the fundamental essence of punishment as, not retribution, reform or deterrence, but as a specific instance of ‘just attribution’.

22 The notion of differentiated spheres of social communication is spelled out further in ch. 14 (cf. also Desire, pp. 279–81). There are ‘specialist communities’ each with ‘its own appropriate structure defining the roles of its participants and sustaining its patterns of communication over time’ (p. 251). This leads to a notion of society, not as an agent with its own projects, but as ‘the coherence in which the spheres of communication flourish in relation to each other’ (p. 253), yet one which nevertheless displays a continuous identity deriving from the ‘tradition’ situated and nurtured in a particular ‘place’ (pp. 255–60; see also Oliver O'Donovan, ‘The Loss of a Sense of Place’, in O'Donovan and Lockwood O'Donovan, Bonds of Imperfection, pp. 296–320).

23 ‘The equality of human lives is simply the metaphysical datum of their unsubstitutability: each has a fitness for human existence that is unique and incommensurable’ (p. 44).

24 The author identifies a third sense in which equal treatment among individuals is mandatory, namely equality before the law, or ‘equality before judgment’ (p. 49). Later, he ventures that scandalous and systematic departures from equal treatment, such as apartheid or slavery, are sufficient to render the authority sustaining them illegitimate, at least for those groups oppressed in these ways. ‘Allowing them no right, it can lay on them no obligation’ (p. 145).

25 But it surely does not lie in the power of any social institution to secure such conditions. If so, then there may not be any special sense in which political authority is grounded in providential action.

27 O'Donovan notes, with approval it seems, that medieval thinkers regarded the ‘usurper’ – the one who seizes power violently in breach of a community's tradition – as ‘void of authority’. He also notes their view that such a usurper might nevertheless acquire legitimacy if the tacit consent of his reluctant subjects were forthcoming, a circumstance that might occur where the usurper eventually met the two criteria of substantive legitimacy at least to some minimally acceptable degree (p. 147).

28 For example, he proposes that citizens stand under a ‘duty of public candour’ obliging them to participate in the critical assessment of political authority's execution of judgement (pp. 137–8).

29 Note here the author's insistence that the ‘tradition’ which political authorities properly represent must be a ‘tradition of right’, i.e. a historically particular way of realising the universal imperatives of attributive justice. On this basis he mounts a searching critique of ‘conservatism’ (pp. 180–5).

31 O'Donovan is likely to resist this suggestion: he holds that while, in general, authority must present its subjects with reasons for action (so that their responses can be truly ‘free’), political authority is, uniquely, ‘non-transparent’, unable to call upon the ‘intuitive perspicuity’ available to us in making sense of other forms of subjection (p. 133). That is essentially what I am questioning. An influential statement of the view towards which I am pointing is Simon, Yves, Freedom and Community (New York: Fordham University Press, 1968)Google Scholar.

Oliver O'Donovan's The Ways of Judgment
×

Oliver O'Donovan's The Ways of Judgment
×

Oliver O'Donovan's The Ways of Judgment
×
×