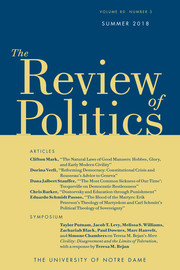 A Symposium on Teresa M. Bejan's Mere Civility: Disagreement and the Limits of Toleration