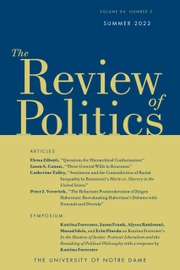 A Symposium on Katrina Forrester's In the Shadow of Justice: Postwar Liberalism and the Remaking of Political Philosophy