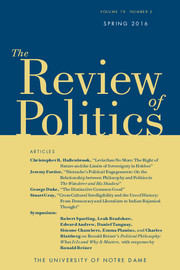 Symposium on Ronald Beiner, Political Philosophy: What It Is and Why It Matters (Cambridge: Cambridge University Press, 2014. Pp. lv, 304.)